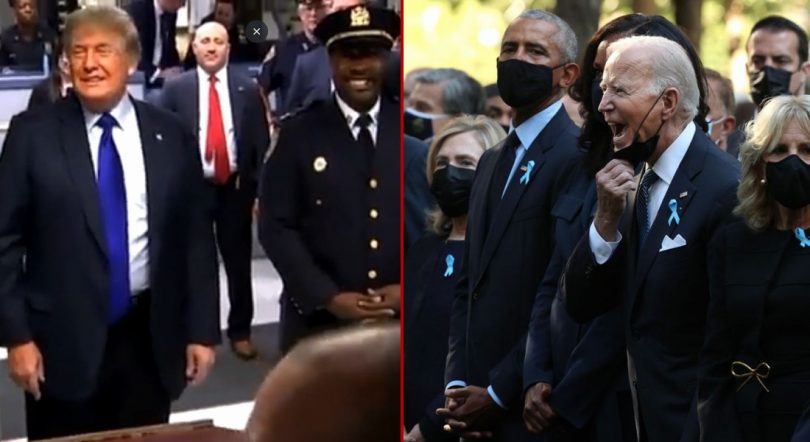 On the 20th anniversary of the 9/11 attacks, former President Donald J. Trump made a surprise visit to FDNY firefighters and NYPD officers in New York City to honor them for their dedication, service, and heroism.

There was more video taken of Trump’s surprise visit.

The former president was greeted with loud applause and cheering as he paid tribute to New York City officers and firefighters. Donald Trump earlier issued a video statement on the “sad day”:

JUST IN – Trump speaks on the 20th Anniversary of 9/11.pic.twitter.com/81rcA2vyGm

President Biden, meanwhile, appeared with former presidents and other political figures attending a ceremony at ground zero in New York City for the 9/11 anniversary.

Biden also appeared to give some kind of ‘shout out’ at the solemn ceremony. The Biden then left to honor those who gave their lives defending America on Flight 93.

“The president and first lady left the memorial just before 10 a.m. to travel to Shanksville to participate in a wreath-laying ceremony commemorating those who died on Flight 93,” the Hill reported.

President Biden did not deliver formal remarks on the solem occasion. He did, however, deliver a video statement on the 9/11 attacks that blamed Americans for ‘Islamophobia.’

The often-predicted surge in ‘hate crimes’ against Muslims turned out to be much less of a problem than Islamic terrorism actually killed Americans after the September 11 attacks. President Biden, for his part, presided over the worst foreign policy debacle in U.S. military history with his Afghan withdrawal.

As the Taliban took over in Afghanistan, the president stranded hundreds of Americans in the country in harm’s way. Islamic terrorists – from ISIS-K to al Qaeda – have now overrun the country. The Taliban raised their flag over the Afghan capitol building on the anniversary of 9/11.

While President Biden may have been at Ground Zero on 9/11, his policies have put America’s counter-terrorism efforts back to ground zero.