Today’s Senate impeachment show trial of Donald Trump kicked off what one senator called “the stupidest week in the senate.”

There was an apocalyptic tone to the proceedings, as the Democrats’ laid out the most incendiary accusations they could muster.

Trump started a ‘coup,’ a ‘riot,’ an ‘insurrection,’ all in a desperate bid to “retain power against the will of the American people,” they argued.

If the President of the United States had truly wanted to remain in power, the most powerful man in the world would certainly have not sent an unruly, unarmed mob to the capitol to disrupt Electoral College proceedings that were his best, most probable chance to cling to office.

If Donald Trump did not feel he could do better than that pathetic excuse for an uprising, there is no way he could believe such a stunt would lead to him remaining in power.

Harvard emeritus law professor Alan Dershowitz even went so far as to say about the House Dems’ impeachment filing:

It would lead to only one Republican conversion that the proceedings were even constitutional: Senator Bill Cassidy of Louisiana.

Donald J. Trump’s second impeachment trial is destined to end up like the first: Another disgraceful Democrat attempt to punish a political enemy that ends in futility.

After all of the Democrats’ political wrangling. The emotional appeals. The deceptively edited video. The outright lies. All for naught. 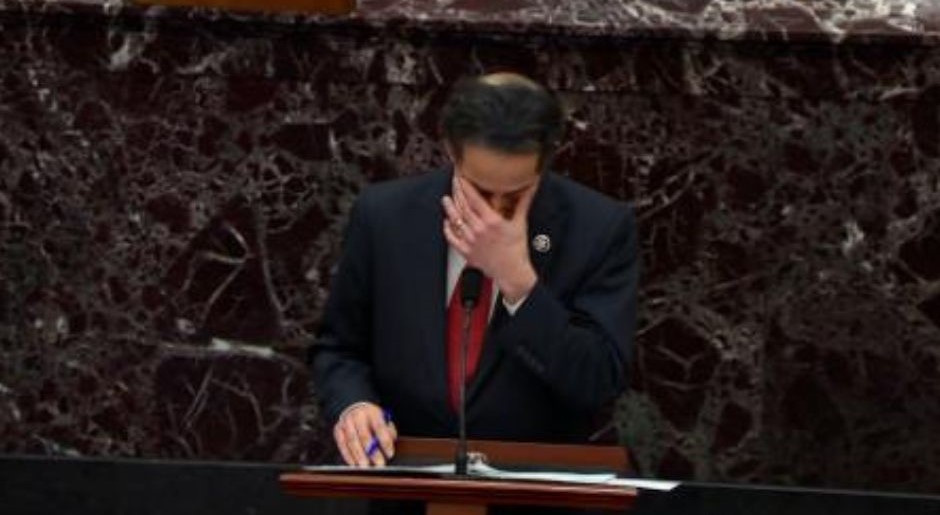 Axios took the temperature of the impeachment trial and came up with a brutally honest assessment: It is all an attempt to set a “narrative.”

As reported at Becker News previously, the Democrats had their Trump ‘incitement’ narrative ready at hand for months prior to the November election. The Democrats had their hearts set on impeaching Trump before he was even elected. The lead impeachment manager, Jamie Raskin, called for Trump to be impeached before he was even sworn into office in 2017.

Two days before President Trump was even sworn in, Democrats were calling for his impeachment.

This was their plan all along. pic.twitter.com/Skx2ql7nIt

The Democrats’ argument that he incited the capitol riots was a “conclusion in search of a justification,” as Republican Senator Kevin Cramer said about the first Trump impeachment. That the riots must have been caused by Trump speaking because they seemed to follow him speaking is an example of post hoc ergo propter hoc reasoning, a fallacy that in Latin means “after this, therefore because of this.”

The Congress knew that a volatile protest was coming to the capitol and that the likelihood for an explosive situation was high. Despite this, they refused to increase security at the behest of the effectively fired former Capitol Police chief, who warned them days in advance at least six times.

The Capitol police would literally hold doors open for protesters and remove barricades for them. Many protesters would merely walk around and take pictures. While criminal trespassers took over the Senate chamber, officers gawked and did nothing except to make pitiful exhortations.

And yet the American people are supposed to believe that this unarmed mob posed a threat to the lives of every Congressmember, many of whom were evacuated to the nearby Cannon building. If that was the case, then the capitol police who made it all-too-easy for the rioters are guilty of professional, if not criminal, negligence.

There is simply too much imagination and not enough substantiation in the Democrats’ arguments. In summary, the “gripping” narrative the Democrats set out to convince the few remaining unconvinced Americans was entirely unpersuasive.

One GOP senator was inured from the popular argument on CNN that the Trump legal defense was a “disaster.”

“I thought they did what they needed to do,” Sen. Roy Blunt said of the Trump lawyers. “The end result is what really matters.”

Senator Tim Scott, who has said previously that Trump is “simply not guilty” had a more straight-shooting way to put it.

“Not a single thing will change,” he told Axios. “The outcome is set.”

It was set in political reality when 45 GOP senators voted to dismiss the impeachment proceedings as “unconstitutional” outright. The Democrats still cannot get the needed 16 Republicans to vote for conviction to believe the trial is even legitimate.

The impeachment trial is also deadlocked in the court of public opinion. Rasmussen earlier reported some “very bad news” about the political theater.

“The Senate begins its impeachment trial of former President Trump this week, but most voters don’t believe Trump will be convicted and few expect to watch the entire trial on TV,” the report said. Nearly two-thirds of likely voters surveyed thought it was at least “not very likely” that Trump would be convicted of the impeachment charges.

The Democrats are thus engaging in a dangerous exercise in political revenge on a private citizen that is costly to the country in terms of time, money and attention, in addition to the tremendous cost to ‘unifying’ the nation after one of the most divisive elections in modern times.

If the Democrats could have put the benefit of America ahead of their own petty vendettas, they would have won an unimaginable amount of good will from the American people. Sadly, it seems that the members of their party are utterly incapable of doing just that.