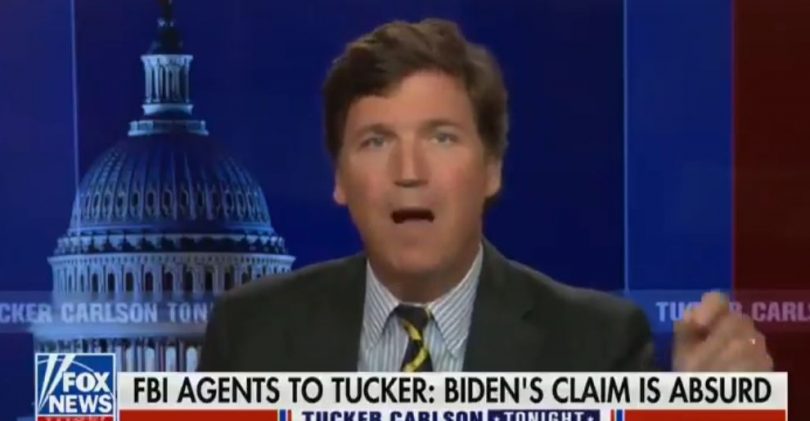 Tucker Carlson dropped a bombshell corroborating that the FBI indeed had informants in the crowd on January 6th. This has profound implications for the entire Capitol riots event: Why didn’t the FBI do more to stop it?

But before Tucker could even explore the ramifications of the information, he revealed a chilling tip from a whistleblower that told him his show’s electronic communications were being monitored. There were details corroborating the tip as highly credible. Watch:

“For decades…, the greatest domestic terror threat has come from radical environmental groups, look it up,” Tucker said. “White supremacists meanwhile are at the bottom of that list. Federal statistics prove it. Americans are much more likely to die of a lightning strike than at the hands of a white supremacist.”

“White supremacy may be ugly, but it is not a meaningful threat to the nation and claiming otherwise is a lie,” he continued. “So why does the Biden administration persist in telling that lie? It’s a racial attack, obviously, you tell black voters that Republicans are in the KKK and they will keep voting for you. And that’s the idea. Easier than fixing Chicago or raising test scores, which they should be doing.”

“But there’s also a deeper significance, for the Biden administration is signaling a very real change to actual policy,” he continued. “The war on terror now ongoing for 20 years has pivoted, it is now being waged against American citizens, opponents of the regime.”

“We saw this on display at January 6 and told you a couple of weeks ago, based on the language of publicly available indictments, that the FBI has prior knowledge of the riots of the capitol that day and the agents we spoke to confirm that is true,” Tucker said.

“The FBI had sources in that crowd, confidential sources, that’s 100% certain,” he said. “But is not just political protest the government is spying on.”

“But unfortunately, they do and in this case, they did,” Tucker continued. “The whistle-blower, who is in a position to know, repeated back to us information about a story that we are working on that could have only come directly from my texts and emails. There’s no other possible source of that information.”

“They did it for political reasons,” Tucker went on. “The Biden administration is spying on us. We have confirmed that. This morning, we filed an employer request asking for all information that the NSA and other agencies have gathered about the show. We did it mostly as a formality and contacted the press office of both NSA and the FBI.”

“You don’t expect to hear much back, that’s the way that usually goes.,” he said. “Only Congress can force transparency on the intelligence agencies and they should do that immediately. Spying on opposition journalists is incompatible with democracy. They are doing it to us and again, they are definitely doing it to us, they are almost certainly doing it to others. This is scary and we need to stop it right away.”

The revelation comes after Tucker Carlson aired allegations that the FBI had informants amongst the far-right extremists at the Capitol on January 6th. This is truly chilling information. The Democratic Party is weaponizing the entire U.S. government to go against its ideological enemies. Every single American should be highly disturbed by this information, regardless of one’s party affiliation.