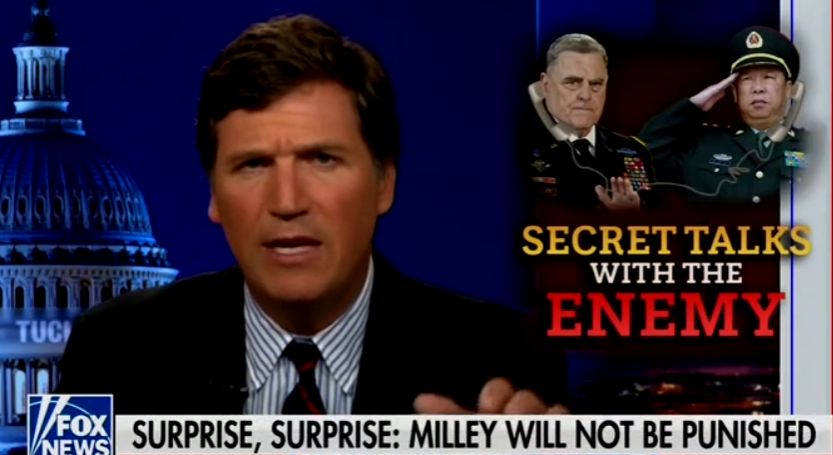 Tucker Carlson railed against President Biden and Chairman of the Joint Chiefs of Staff Gen. Mark Milley on his Wednesday show for selling the country out to the communist Chinese.

“Just hours ago, the former Secretary of Defense Christopher Miller told Fox News he has no idea what Mark Milley is talking about. Quote: ‘As Secretary of Defense, I did not and would not ever authorize such conduct.’ As Miller put it, quote, ‘a lesser ranking officer accused of such behavior would immediately be released of duty,’ but Mark Milley has not been relieved of duty and apparently he won’t be. Today, Joe Biden endorsed him and the job he is doing,” Tucker said and rolled the clip.

” I have great confidence in General Milley,” Biden replied.

“So, for secretly revealing American military strategy to the Chinese government, for threatening violence against a sitting American president, Mark Milley is not going to be punished,” Tucker said. “Are you surprised by this? Maybe you shouldn’t be. In Washington, this is normal. Colluding with the Chinese government is not considered a sin, it is not even weird. Watch this video from Milley from 2015 as he explains that China is somehow not a threat to us.”

“Is Russia a greater threat to the U.S. than ISIS right now?” a reporter asked.

“I said in testimony that I consider Russia the number one threat to the United States,” Milley said. “Russia is the only country on earth that has the capability to destroy the United States of America. It is an existential threat, by definition… China is not an enemy… They are going to develop themselves and are developing themselves into a great power. That is not to say, however, that they are an enemy, and that is not to imply nor say that conflict with China is inevitable.”

“So, Milley thinks China is winning and so he is sucking up to his new master,” Tucker said. “So, he tells us ‘Russia is the only country on earth that has the capacity to destroy the United States.’ That’s absurd. Nobody believes that. The Chinese military is far, far more powerful than anything Vladimir Putin can do, it’s not even close. Milley does not end lying about it, and it should make you nervous. Why is he lying about that?”

“No one in Congress seems to care, at all,” Tucker continued. “People with oversight seem to be on his side,” he added, referring to Senator Tom Cotton, who wants Milley to testify before Congress on the report.

As reported on September 1, Pentagon sources told Becker News General Mark Milley responded internally to escalating demands for his resignation or firing in the wake of the Afghanistan military disaster, by saying that “he will not be fired nor will he quit,” indicating that he had the full backing of the White House.