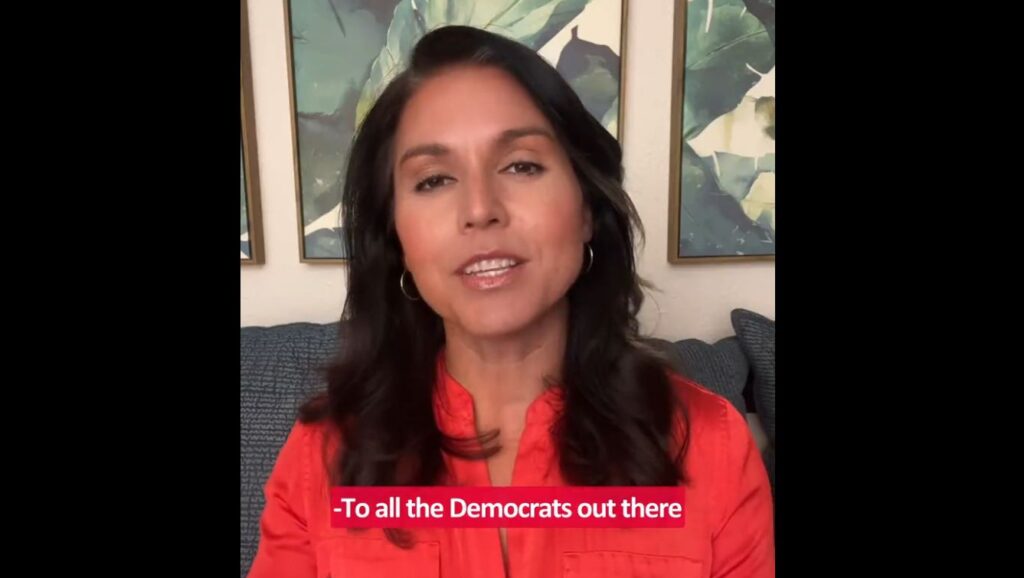 Former Democratic Rep. from Hawaii Tulsi Gabbard had some fighting words for those in her party who are silent about the Biden administration’s deeply un-American ‘Ministry of Truth’ that has been formed in the Department of Homeland Security.

This “Disinformation Board” is a threat to Americans’ right to free speech, and Gabbard is not holding back from calling out Democrats who will stand for it. Watch:

“To all the Democrats out there who say over and over again about how you stand strong against dictatorships, I’m wondering where your voice is now condemning this creation of a Ministry of Truth in our own Department of Homeland Security,” Gabbard said.

“Even worse, Republicans who are out there saying, ‘Hey, we need this propaganda board, as long as it’s not headed by somebody who’s biased, as long as it’s not Jankowicz,’ all of you need to read the Bill of Rights again and be reminded about what our freedom of speech really means and how important it is to us all,” she added.

On Monday, White House Press Secretary Jen Psaki was confronted about this Orwellian “Disinformation Board.” Watch:

“Does he want the people on this board to start censoring information that is not helpful to him?” Fox News’ Peter Doocy asked her.

“Well, let me be clear on exactly what this board does or what the work they are doing does,” Psaki replied. “In their announcement, which is publicly available on the Department of Homeland Security website for anyone to read, it says quote, ‘The primary mission is to establish best practices to ensure that efforts to understand and respond to diinformation are done in ways that protect privacy, civil rights and civil liberties and the right to free speec’h.”

“I think I noted exactly what the objective of the board is and continuing the work of the prior administration, and the woman, you noted, has extensive experience and has done extensive work addressing disinformation,” Psaki replied. “She has testified before Congress, testified in Europe, she has done worked closely with the Ukrainians and has unique expertise, especially at this moment we’re facing.”

As earlier reported, Jankowicz played an active role in downplaying the authenticity of the Hunter Biden laptop ahead of the 2020 elections.

Even more damning, Nina Jankowicz admitted to Congress in 2020 that she did not believe the government should be in the business of telling the public what is and isn’t ‘disinformation.’

Tulsi Gabbard is one of the few Democrats calling out this dangerous, un-American behavior. No Democrat is perfect, but when it comes to defending civil liberties, the U.S. veteran Gabbard has been one of the good ones.