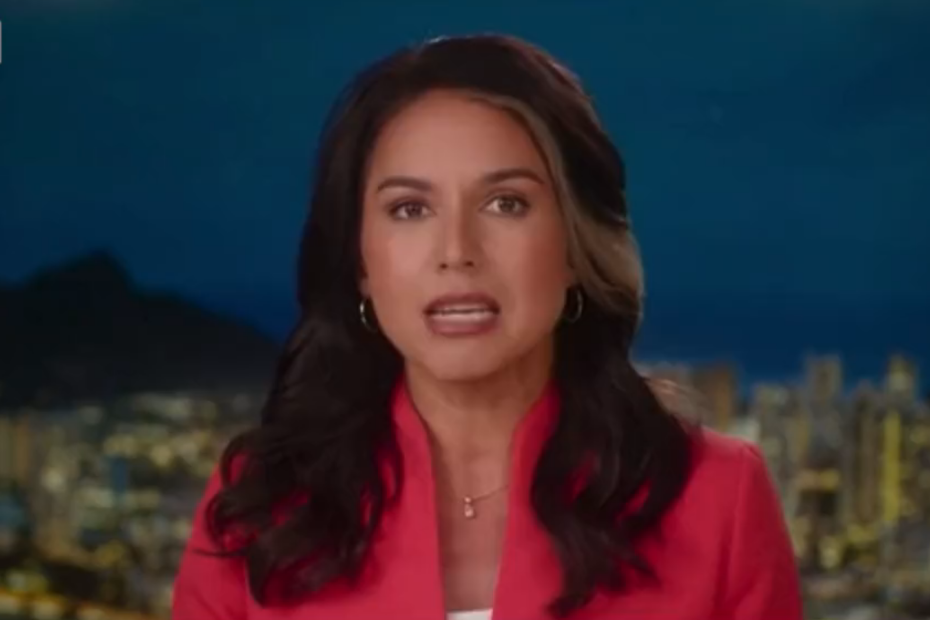 Hawaii Dem. Rep. Tulsi Gabbard, a Lieutenant Colonel who served in the Iraq War and currently a Major in the U.S. Army Reserve, called out the Democratic Party for trying to foment a ‘civil war’ by comparing its political opponents to al Qaeda jihadists on the anniversary of 9/11.

Gabbard had an important message for Americans, which she gave on “Jesse Watters Primetime.”

“I feel sick right now seeing you play these different clips,” Gabbard said. “You know, I, like so many of my fellow service members, I enlisted because of those Jihadist attacks on 9/11 to support and defend our Constitution, to protect our fellow Americans and to go after and kill those who attacked us on that day. And it is despicable and outrageous to hear these people, to hear these people, say the things that they’re saying, comparing our fellow Americans to terrorists — actually worse. They literally said they are worse than Al Qaeda terrorists.”

“This just shows how far they are willing to go pushing our country to the brink of civil war, demonizing, targeting our fellow Americans, as worse than Al-Qaeda terrorists, all to hold onto their power,” Gabbard continued. “That’s all they care about. Whether you’re talking about the Biden administration, these talking heads on TV, U.S. senators, the Department of Homeland Security, the people who are some of the most powerful people in our country, who have the strings of the national security apparatus at their fingertips, targeting our fellow Americans, just because they didn’t vote for Joe Biden, all because they need, they want to hold on to power.”

“This is outrageous and should be concerning to every single American,” she added. “And we’ve got to see right through what they’re doing. The timing of this is not an accident. We are just weeks away from the midterm elections. They are concerned that they will lose the seats that they have. And so they’re, again, not caring about the consequences and the destruction to the country and the heart of the American people, willing to foment this fear to say, ‘Hey, don’t you dare vote for these Republicans, because they voted for Trump, and they are traitors and they’re a greater threat to our country than Al Qaeda jihadists.’

As reported earlier, President Joe Biden on the 9/11 anniversary on Sunday drew a parallel between the War on Terror and the regime’s War on MAGA.

“It’s not enough to gather and remember each September 11th those we lost … because on this day, it is not about the past, it’s about the future,” Biden intoned. “We have an obligation, a duty, a responsibility, to defend, preserve and protect our democracy.”

Biden’s invocation of the duty to ‘protect our democracy’ is an allusion to the regime’s efforts to tie a few dozen violent January 6 rioters to MAGA protesters charged with federal crimes such as trespassing and parading without a permit in the capitol building. The Biden administration is stretching this argument even further by tying January 6 rioters and the 74 million law-abiding Trump voters who cast a ballot in the 2020 election.

The solemn occasion of 9/11 anniversary was just another opportunity for the Democratic Party to cast aside all sense of dignity or propriety to smear millions of law-abiding and peace-loving Americans as a ‘threat to democracy.’ It is all the evidence that the American people need to see that the true threat to the country is actually the Democratic Party, which now needs to be removed from power before it further corrupts the U.S. government and undermines the integrity of our elections.