U.S. Marine Who Saved Baby at Kabul Airport is Now Under Investigation for Appearance at Trump Rally

The U.S. Marine who provided an iconic moment during Biden’s disastrous Afghan withdrawal by saving a baby at Kabul airport is under investigation for appearing at a Trump rally. 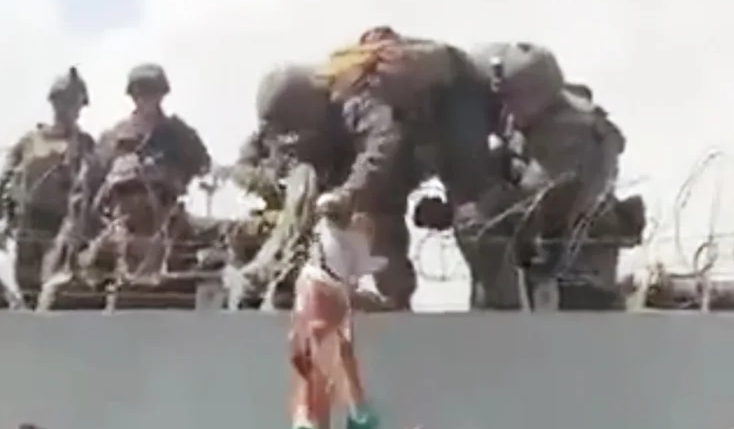 The Marine, Lance Cpl. Hunter Clark, was one of nearly 6,000 U.S. troops stationed at Kabul airport during the precipitous military withdrawal in August. At one point, Clark reached over a razor-wire-lined wall to pick up a baby being handed over by a desperate mother. The heartfelt moment of compassion at Kabul airport was a direct contrast with the abrupt withdrawal overseen by the Biden administration, which put thousands of American citizens and Afghan allies at mortal risk of Taliban reprisals.

Lance Cpl. Clark is being rewarded for his bravery and sacrifice with a military investigation into his plain clothes appearance at a Trump rally on September 25, Task and Purpose reports.

“On Sept. 25, Clark appeared on stage with Trump for just under a minute at a ‘Save America Rally’ in Perry, Georgia,” Task and Purpose reported. “Now Clark’s command is looking into whether he violated the military’s ban on active-duty troops engaging in partisan political activity.”

“The 24th Marine Expeditionary Unit (MEU) has initiated a command investigation regarding LCpl Hunter Clark’s attendance at the event last weekend to determine if any DoD policies were violated,” said Capt. Kelton J Cochran, a spokesman for the 24th MEU. “Any details pertaining to this incident are not releasable while the investigation is being conducted.”

The Trump rally appearance on September 25 was reported by the Post Millennial. It can be watched below:

“We’re also honored to be joined by one of the Marines who bravely served in Kabul during the withdrawal and helped evacuate children over the airport and over the airport wall,” Trump told the crowd in Perry, Georgia.

“You saw him, he did a great job, Lance Cpl. Hunter Ian Clark. Lance corporal get up here!” Trump announced.

Lance Cpl. Clark then took the stage to briefly describe what took place at the Kabul airport.

“I am the guy who pulled the baby over the wall and it’s definitely probably one of the greatest things I’ve ever done in my entire life,” Clark said after the introduction by former President Donald Trump.

“All the support from y’all, it really means a lot and I’m glad to be home now today. Thank you,” Clark added.

As Task and Purpose points out, Clark was not in uniform when he appeared on stage with Donald Trump. Nor did he “campaign for a political candidate or suggest that service members follow a political party.”

The U.S. military, meanwhile, is turning a blind eye to the social media ravings of Woke soldiers, such as Staff Sergeant Cindy Bronson, who appeared in uniform in several Tik Tok videos and threatened American citizens who did not comply with her orders under a hypothetical scenario of martial law.

Becker News has requested an official response from Staff Sgt. Bronson’s commanders, but one still has not been forthcoming.

Donald Trump’s Georgia rally in September honored the sacrifice of the 13 U.S. military troops who were slain at Kabul airport during the Afghan evacuation by putting out thirteen empty chairs. It will speak volumes about the military leadership under now Commander-in-Chief Biden how it decides to ‘reward’ Lance Cpl. Clark for his military service.