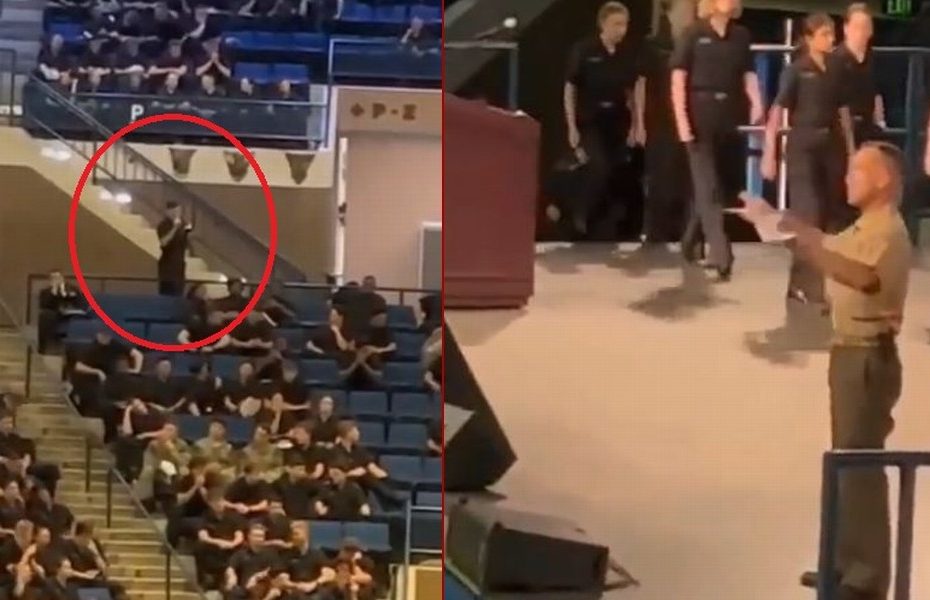 A Navy midshipman who was attempting to explain to a group of 4,000 fellow midshipmen why being forced to get the Covid vaccine is not ‘living honorably’ was shut down by a senior officer in a video that has now gone viral.

“Third class, your 21st company,” the young man said. “Sir, through many of the definitions we voted on for what it means to live honorably, we talked about how to live honorably is different for every person based on their own moral code. For my midshipman year, myself included, getting the government vaccine will not be living honorably. Even so, the Academy has been attempting to strongarm us into either getting the vaccine or DOR for the past year.”

The Navy midhsipman in the video was one of nine midshipmen who have refused the Covid shots despite the repercussions. The midshipmen are currently unlikely to be commissioned as officers in Biden’s military.

In the Air Force Academy, cadets that decline the jabs won’t be commissioned as military officers, although they can earn bachelor’s degrees. The Coast Guard Academy in late August ordered seven unvaccinated recruits off campus after disenrolling them from the program.

“They were escorted to the gate like they were criminals or something,” their lawyer, Michael Rose, told The Day newspaper.

“No one helped them with travel arrangements or gave them any money,” added Rose, who is based in South Carolina. “One had to get to California, one to Alaska. One’s estranged from home and living out of his truck, according to an email I received describing his situation.”

According to a report in the Navy Times, the cadets’ names were not released. Rose said academy officials were “particularly mean-spirited” and could have waited until lawsuits against the forced vaccinations were concluded.

In one lawsuit, Rose is representing more than 30 plaintiffs in federal court, including military personnel and service academy cadets.

Midshipment and cadets in all of the military branches are facing severe consequences for refusing to take the Covid shots. It is one reason why Senator Marco Rubio introduced a bill, the Defending Freedom of Conscience for Cadets and Midshipmen Act, to prevent Naval and Air Force Academy cadets from being punished over the jabs. Rubio’s Act would:

“It is outrageous to punish young men and women who want nothing more than to serve their nation,” Rubio said about the act.“These are the types of ridiculous, unnecessarily punitive measures that discourage patriotic Americans from joining the military. The Academy should stop playing politics and focus on preparing cadets and midshipmen for their future service.”

“The decision to end promising military careers solely based on a COVID vaccine seems punitive and another example of clumsy government overreach,” Rep. Cindy Hyde-Smith remarked.  “The cadets and midshipmen at our service academies are among the brightest in the country, and they shouldn’t be dismissed so flippantly.”

“It is shameful to punish these cadets and diminish their commitment to serve our nation over a single personal health decision,” Sen. Tim Scott commented. “I am proud to join Senator Rubio on this common sense measure to protect the cadets and midshipmen of our nation’s service academies.”

“Forcing our brave young men and women preparing to serve our nation to violate their consciences and religious beliefs is ridiculous and completely un-American. Military academies should be focused on training their cadets and midshipmen, not imposing top-down COVID-19 vaccine mandates,” Rep. Kevin Cramer said.

“The dedicated cadets and midshipmen at our military service academies deserve nothing short of our admiration and support for their decision to serve their country at a young age,” Rep. Doug Lamborn remarked. “It is unfortunate that political leadership in the U.S. Department of Defense is seeking to penalize these brave Americans by preventing them from graduating or serving in the military. They are even considering asking them to pay back hundreds of thousands in tuition. It is an honor to stand up for the constitutional rights of these young men and women, and I look forward to introducing this bill in the U.S. House of Representatives.”

In the U.S. population, there is near-universal antibody seroprevalence due to prior infection. The Covid shots have known adverse events, and it is a confirmed scientific fact that the mRNA shots do not stop the spread of the virus.

About 2,600 active-duty sailors remain unvaccinated against COVID-19 a year after the deadline for mandatory vaccination. The Navy has dismissed nearly 2,000 sailors over the Covid shots, all of whom have received an honorable discharge.

Update: Although a lawsuit refers to these future military officers as ‘service academy cadets,’ this article has been changed to reflect that the Navy calls them ‘midshipmen.’