Tucker Carlson was recently accosted in a fly fishing shop in Livingston, Montana by someone who people have referred to as ‘Montana man.’ The video has captured widespread attention, but new information has arisen about the man who called Tucker the “worst human being.”

In a major update, there is information surfacing that the entire ordeal may have been a “set-up” and the White House knew about it all along. (See the new information at the bottom of the report.)

The belligerent man berating Carlson in front of his daughter who uploaded the video of the incident onto Instagram is named Dan Bailey.

Dan Bailey posted it onto Instagram with the comment: “It’s not everyday you get to tell someone they are the worst person in the world and really mean it! What an asshole!”

Bailey had more to say about Carlson on his Instagram video excerpt: “This man has killed more people with vaccine misinformation, he has supported extreme racism, he is a fascist and does more to rip this country apart than anyone that calls themselves an American.”

While in the store, however, Tucker Carlson handled the aggressive man’s tirade coolly. The audience can decide for themselves who came off as an “asshole.”

“I don’t care, man,” Bailey said as he got in Carlson’s face. “Dude, you are the worst human being known to man. I want you to know that.”

“I’m not going to debate you,” Carlson said. Then he turned to look at the person recording the video.

“I don’t care that your daughter’s here,” Bailey ranted. “What you’ve done to people’s families, what you have done to everybody else.”

“Son,” Carlson said as he walked away.

Improbably, although the name of the store was Dan Bailey’s Fly Shop, this Dan Bailey is not affiliated with the shop, according to a release by the store owner Dan Sexton.

“This person has no affiliation with our business, other than he shares the same name as our founder, who passed away in 1982,” the shop’s statement said. “To be clear, we treat every customer equally and respectfully. Our staff was professional and cordial to Mr. Carlson, as we are with all of our customers.” 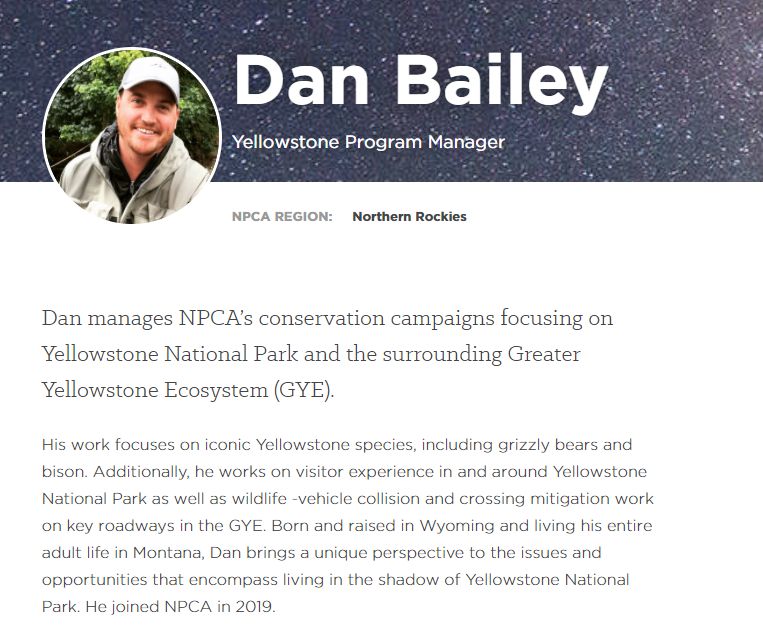 According to his LinkedIn profile, he still works with the National Parks Conservation Association. 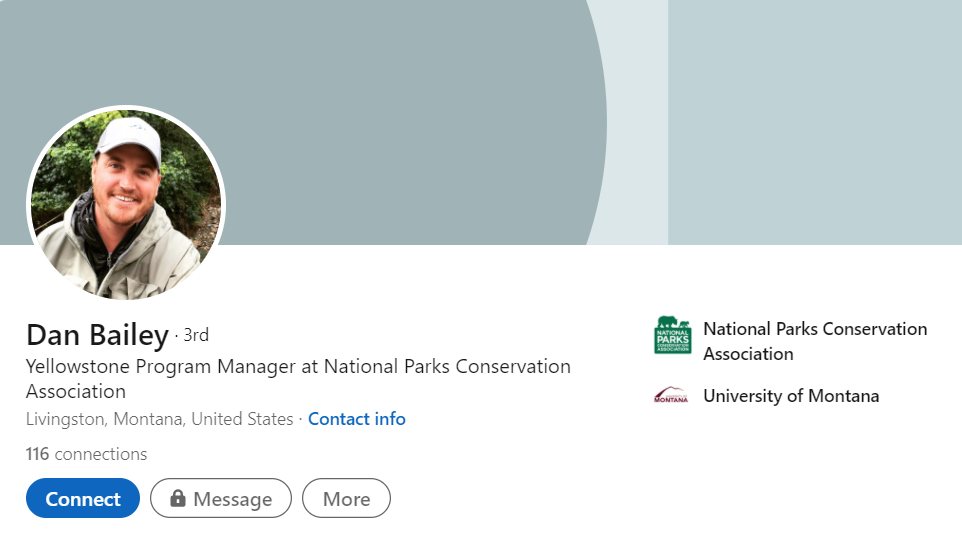 He is fairly well-educated, as he received an M.S. from the University of Montana, as well as a B.S. from Montana State University-Bozeman. 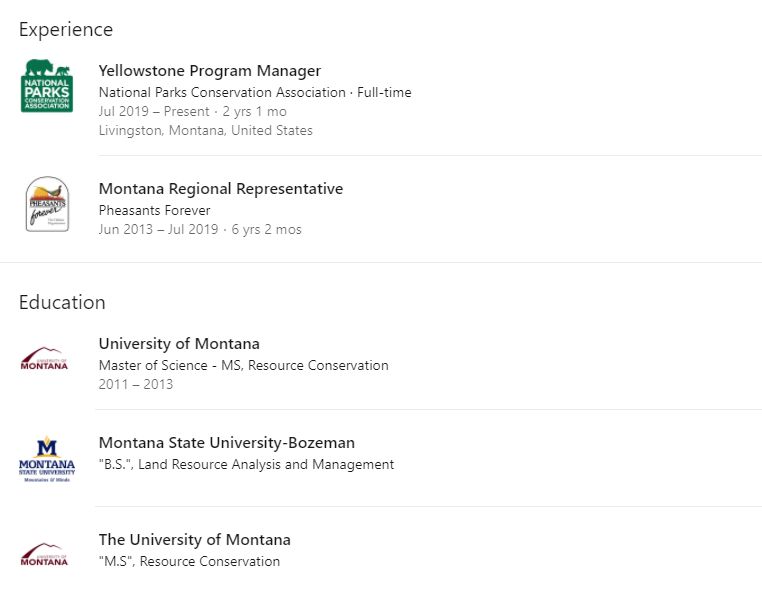 But most interesting of all is an association that was uncovered through a description of his background as a Board Member of the Taimen Fund. The connection was located by a Twitter user named JLaw, who noted it was “kinda odd.”

“Dan began his work in Mongolia during the summer of 2007 as a river ecologist working on the Asia Foundation’s ‘Securing Our Future’ project,” the fund’s page says. “During his first field season Dan performed numerous river assessments across Mongolia with a team of Mongolian and American scientists.  If you ask Dan the real reason behind his trip to Mongolia it was for a chance at the elusive taimen. ‘I saw a photo of a taimen when I was 14 and knew from that date forward I would catch one of these beautiful fish.'”

“Following his work with the Asia Foundation Dan began guiding on the Delgermörön, where the perilous situation that confronted taimen in Mongolia was experienced first-hand,” the description continues. “As a result he started working on a project that was intended to inform foreign anglers about taimen conservation and protection.  This project was the foundation for a master’s degree from the University of Montana, which Dan completed in 2013.”

The Asia Foundation itself has a colorful past, which includes a prior known association with the Central Intelligence Agency. Although the Asia Foundation formally separated from the CIA years ago, it still receives sizable government funding, including from the U.S. State Department.

Based on declassified CIA documents and NY Times reporting, the Asia Foundation has a history of misleading the public about its ties to the CIA. It also has a history as a propaganda front for U.S. intelligence activities.

“The Asia Foundation is, on the surface, a private non-profit that contributes to the development of Asia, including donating millions of books,” a 2017 MuckRock article notes. “In reality, since it was created by Central Intelligence Agency in 1951, TAF has engaged in a decades long campaign to misrepresent its origins, purpose, and funding.”

“Originally conceived by CIA as a propaganda machine and a front for covert activities including psychological warfare, TAF has controlled its narrative by becoming the primary source of information on its organization,” the article goes on. “The narrative presented by TAF effectively erases the first years of its history and misleads the public about its sources of funding over the years. TAF’s deceptions aren’t limited to the public, either. Declassified documents reveal that TAF provided information to the State Department that was incorrect and misleading; this information was subsequently given to Congress. These misrepresentations were then cited in the findings of Congress’ ‘Asia Foundation Act’, which provides funding for the Foundation, and have become commonly referenced.”

“TAF portrays itself as having been created ‘with the approval of the National Security Council’ and later being funded by, but remaining functionally independent from, the CIA,” the article notes. “In reality, it was a weapon crafted by CIA explicitly for political warfare. Armed with CIA propaganda products, guided by CIA priorities, staffed with CIA contract employees and former CIA staffers, TAF spent the first 16 years of its existence under the direct control of the Agency. For more than a year after that, it relied on funds that the Agency had covertly provided. TAF did not lose touch with the Agency in the following decades, nor did it lose its support.”

“While TAF has done good work, it also misleads the public about its origins with CIA, and about the current source of its funding,” the article’s author Emma North-Best adds.

There is no evidence to suggest that Dan Bailey was working with the CIA or was tipped off by intel about Tucker Carlson being in Livingston, Montana. Bailey appears on the surface to be a public sector employee whose behavior may have crossed an ethical line, but he may have acted within his legal rights.

However, it is undeniable that the U.S.’s intel services are being weaponized against dissident patriotic voices such as Tucker Carlson’s. There is no doubt the U.S. government is engaging in a ‘shadow game’ with Americans over narratives and appearances. This is where any video-recorded public confrontation of a dissident conservative voice becomes potentially scary.

Tucker Carlson’s public confrontation comes amidst a backdrop of his controversy over alleged NSA spying. Carlson attests the agency has admitted to his “unmasking”; meanwhile, the NSA denies “targeting” Carlson, even as one of CNN’s sources confirmed he was “unmasked.”

According to Jack Posobiec, an unnamed White House official said it was a “set-up.”

Just In: The White House knew about the Tucker 'confrontation' and the entire set-up was planned out in advance, per WH official

“The White House knew about the Tucker ‘confrontation’ and the entire set-up was planned out in advance, per WH official.” Posobiec said on Twitter.

The Fox News host has a history with public confrontations, including with Antifa activists who vandalized his home, screamed intimidating chants, and even threatened his family in 2018. When it comes to public intimidation, it appears to be the radical left’s preferred method to attempt to silence those who speak out against them.