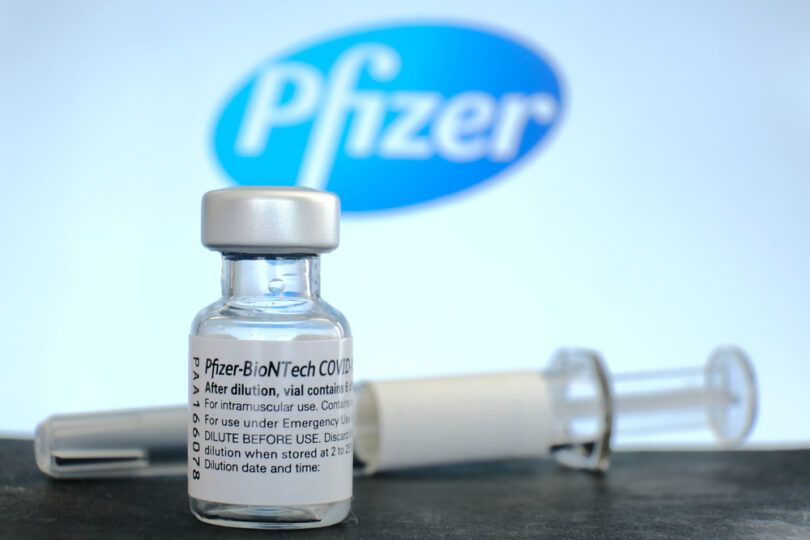 The US Food and Drug Administration on Monday authorized a booster shot of Pfizer’s COVID-19 vaccine for children ages 12 to 15. The FDA also authorized a Pfizer booster for immunocompromised children ages 5 to 11. This would include those who’ve had an organ transplant or an underlying health condition that would prevent further

The FDA also shortened the time all people need to wait between getting their second dose of Pfizer and booster shot to five months instead of the currently recommended six months. While this change applies only to Pfizer’s vaccine, the FDA said in a news release, the agency will continue to review data on all available COVID-19 vaccines and “provide additional updates as appropriate.”

An FDA media call with Acting FDA Commissioner Janet Woodcock and the FDA’s Director at the Center for Biologics Dr. Peter Marks attempted to justify the decision in a media call on Monday.

Dr. Peter Marks said that the risk of myocarditis to 12 to 15 year age range for a third shot was “quite acceptable” compared to potential benefits even though an Israeli study showed that this age group was two to three times risk of myocarditis after a second shot of the mRNA shots.

As reported in Science in June, the shots have been tied to an increase in heart inflammation in young people.

“The COVID-19 vaccine made by Pfizer and BioNTech appears to put young men at elevated risk of developing a heart muscle inflammation called myocarditis, researchers in Israel say,” Science noted. “In a report submitted today to the Israeli Ministry of Health, they conclude that between one in 3000 and one in 6000 men ages 16 to 24 who received the vaccine developed the rare condition. But most cases were mild and resolved within a few weeks, which is typical for myocarditis. “I can’t imagine it’s going to be anything that would cause medical people to say we shouldn’t vaccinate kids,” says Douglas Diekema, a pediatrician and bioethicist at Seattle Children’s Hospital.”

“Israeli health officials first flagged the issue in April, when they reported more than 60 cases, mostly in young men who had received their second dose of vaccine a few days earlier,” the report continued. “Around the same time, the U.S. Department of Defense began to track 14 such cases. In mid-May, the U.S. Centers for Disease Control and Prevention said it, too, was reviewing myocarditis cases. Officials at the European Medicines Agency said on 28 May they had received 107 reports of myocarditis following the Pfizer-BioNTech vaccine, or about one in 175,000 doses administered. But relatively few people under age 30 have been vaccinated in Europe.”

The survival rate of healthy children is 99.99995% (the infection survival rate overall is at least 99.995%). Covid deaths are one percent of annual deaths for those under age 18. Children are not at significant statistical risk from Covid-19.

Cardiologists have reported a huge spike in heart inflammation cases to the American Heart Association (AHA). A cardiac surgeon in November circulated a warning to the AHA that heart inflammation markers are drastically increasing in patients in conjunction with mRNA vaccination rates. 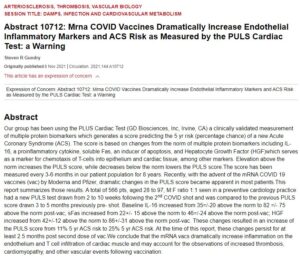 “Recently, with the advent of the mRNA COVID 19 vaccines (vac) by Moderna and Pfizer, dramatic changes in the PULS score became apparent in most patients. This report summarizes those results,” Dr. Guidy wrote, adding, “We conclude that the mRNA [vaccines] dramatically increase inflammation on the endothelium & T cell infiltration of cardiac muscle and may account for the observations of increased thrombosis, cardiomyopathy & other vascular events following vaccination.”

“You cannot get any paper published that is anti-vaccine nowadays,” he added. “Academics will ONLY believe what is peer reviewed. So the vaccines are safe because there are no papers saying it isn’t, even though the data shows it isn’t. BUT NOBODY LOOKS AT THE DATA anymore.”

An interview with Aga Wilson of News Voice gave a fuller presentation of Dr. Rose’s views.

“Dr. Jessica Rose, who is normally positive about vaccines, says that VAERS (Vaccine Adverse Event Reporting System), the US database for vaccine injuries, has only managed to collect an estimated 1% of the total number of serious side effects from mRNA injections,’ NewsVoice reported. “VAERS is, unfortunately, a weak system when it comes to how side effect data is handled, says Rose. She, therefore, divided adverse reactions and side effects into several categories such as neurology, immunology, reproductive organs, and cardiovascular. In this way, she has created a warning system where it should be easier to see if and in that case how side effects can be linked to the mRNA vaccines.”

It is important to note that Pfizer’s documents reveal that there should be far more Adverse Events than are being officially reported; however, we cannot say how much more, because Pfizer is redacting its documents that were used for the Emergency Use Authorization by the FDA.

As Becker News reported earlier, Food and Drug Administration has provided its first batch of ‘confidential’ documents, in accordance with a FOIA lawsuit by the Public Health and Medical Professionals for Transparency. The redacted documents were the basis of the FDA’s Emergency Use Authorization of the Pfizer-BioNTech “vaccine*,” and subsequent federal vaccine mandates.

The FDA does not intend to fully release Pfizer’s clinical trials information used to justify its authorization of the ‘vaccine’ for 55 years.  Two months after the lawsuit was filed, the FDA produced the first 91 pages of the “more than 329,000 pages potentially responsive to Plaintiff’s FOIA request.” The documents showed that AEs are much more in line with the critics’ estimation than with the public record.

Dr. Scott Gottlieb Gives Unbelievable Confession: ‘A Cloth Mask is Not Going to Protect You’ from an Airborne Virus