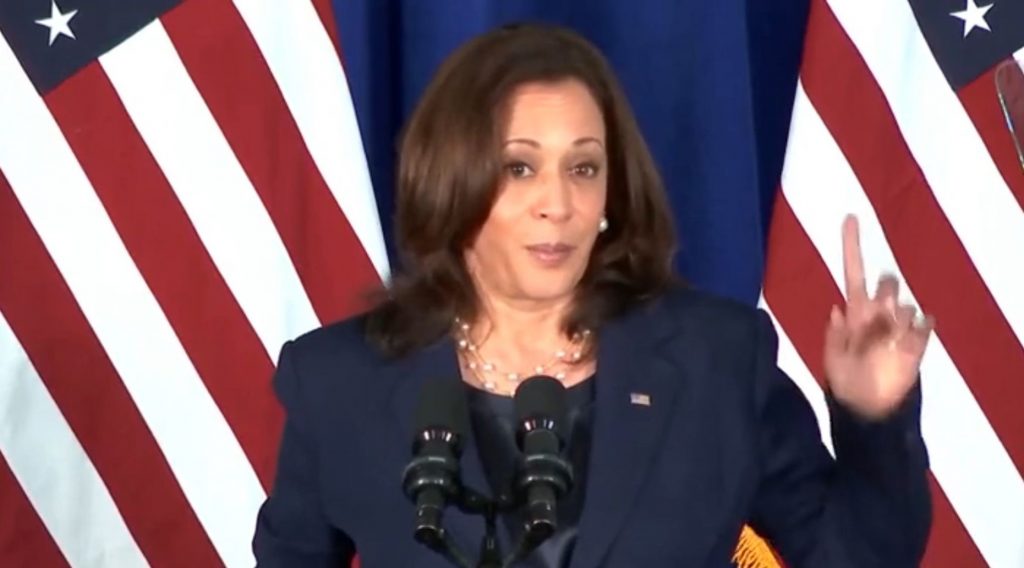 Vice President Kamala Harris announced that the DNC is funding a $25 million initiative called ‘I Will Vote’ on Thursday. In the process, she made some extreme claims about Republicans’ intentions behind state election integrity laws.

“So far this year, 17 state legislatures have enacted 28 new laws that will make it harder for Americans to vote,” Harris claimed. “These bills — now, be clear about enacted — these bills have already become law. They are now on the books.”

“And that’s not to mention the nearly 400 bills that state legislatures are attempting right now to pass,” she added. “You know what’s going on in Texas right now. This all is designed, I believe, to make it harder for you to vote, so that you don’t vote,” she baselessly claimed.

“Let’s talk about what exactly these laws will do,” she went on. “What will they actually do? Well, let’s say in the last election you may have voted early because you work long hours. Well, these laws will cut early voting.”

“Let’s say your cousin voted by mail to avoid the long lines,” she continued. “Well, these laws will cut vote by mail. Say your coworker, say your friend next to you, friend, voted in person on Election Day and put on that sticker with pride. Well, these laws will make it difficult for folks who wait in line.”

“These laws create obstacle upon obstacle,” she said. “These laws make it harder for you to vote, because they don’t want you to vote.”

“So we need to fight back,” she added. “In some states, Americans have successfully blocked some of the anti-voter bills from becoming law, and others are being challenged in court. In Congress, leaders are working to passed two bills into law that would protect and strengthen voting rights. And there is another important component of our work together, and that is mobilizing to ensure Americans’ vote in the elections counts.”

Let’s go through these ludicrous claims and outright lies one at a time.

“What I’m worried about is how un-American this whole initiative is,” Biden claimed. “It’s sick. It’s sick … deciding that you’re going to end voting at five o’clock when working people are just getting off work.”

“On Election Day in Georgia, polling places are open from 7 a.m. to 7 p.m., and if you are in line by 7 p.m., you are allowed to cast your ballot,” Kessler noted. “Nothing in the new law changes those rules.”

The Federalist pointed out that the NY Times “for over two decades has warned readers that the most common sort of election fraud involves absentee voting.” However, when Donald Trump was on the presidential ballot, this editorial line drastically shifted to argue that anyone who believes absentee ballots are more susceptible to fraud is engaging in ‘conspiracy theories.’ If that is true, then the Times was a ‘conspiracy theorist’ for decades.

Furthermore, the changes to the absentee ballot laws are not even that dramatic in a historical context. Absentee ballots window shifted from 180 days before election day to 78 days, which is an ample period of time to cast a vote. Early voting is 17 days running up to the Friday before the election. If these guidelines are “restrictive,” then we might as well make elections start the day after Election Day.

Lastly, there is the now-infamous lie about the water bottles in lines, which Harris implied but carefully dodged from saying out loud. This was a lie kick-started by Atlanta Mayor Keisha Lance Bottoms in April.

“The new Georgia law, however, which expands early voting, offers no such broad prohibition on water given to voters in line,” the Federalist correctly notes.

“While the law bars political interest groups from trying to influence voter decisions in line with refreshments punishable by misdemeanor, the new restrictions provide explicit exceptions to election workers,” the story added.

“This Code section shall not be construed to prohibit a poll officer from … making available self-service water from an unattended receptacle to an elector waiting in line to vote,” the bill reads.

There you have it. Kamala Harris smeared state lawmakers’ intentions behind their election integrity laws based on at least three false claims or implications. Because nothing says ‘pure motives’ like outright lying to the voters’ faces.