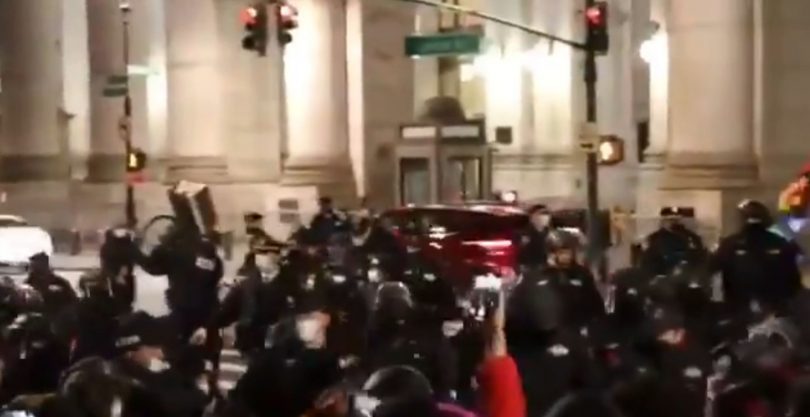 It was the Pro-Trump insurgency that wasn’t.

Despite repeated breathless claims that Trump supporters were threatening the very existence of America’s constitutional republic, there was hardly a blip of protest at the country’s 50 state capitols or the nation’s Capitol.

At least 10 states are activating National Guard troops in their capital cities in response to the F.B.I.’s warning that armed protesters could target cities across the U.S. in the days leading up to the presidential inauguration.https://t.co/c73Vp3nZy8

“More than a dozen states also mobilized National Guard troops in preparation for the potential unrest,” hard left publication Slate noted. “Yet, those threats failed to materialize on Inauguration Day.”

The closest our nation got to a ‘Pro-Trump uprising’ was one lonely man standing outside New York’s state capitol waving a little flag.

Scenes from the state Capitol on Inauguration Day, via ⁦@JMeorePhoto⁩
⁦@PatOehlerPhoto⁩

One Trump supporter was there this morning. He said he figured others would too. https://t.co/ScvJCreqlc

The lack of any due diligence to vet if the threat to the nation’s state capitols was based on any actual intelligence did not stop former CIA Director John Brennan from going onto MSNBC and stating that the Biden intel community would be targeting Trump supporters for potential extremist ties.

Brennan said the new administration was “moving in laser-like fashion to try to uncover as much as they can about” the pro-Trump “insurgency” that includes “religious extremists, authoritarians, fascists, bigots, racists, nativists, even libertarians.”

The inflammatory statements come as the only hint of an insurgency on Biden’s Inauguration Day came not from Trump supporters, but from violent communists known as Antifa, as well as radicalized Black Lives Matter activists.

In New York, dozens of police were reportedly injured in a violent riot. It was one of thousands that have taken place in major cities around the country, with barely a word of protest from the Democrats or their associated media outlets.

Last night in NYC-event was called the Black Liberation March
Dozens of cops injured. This is the left’s 5,000th violent riot in 1year’s time. But it wasn’t conservatives-so it was a glorious, historic & necessary thing. And definitely NOT an insurrection!pic.twitter.com/oDxLP67pF2

Portland: Watch shocking footage of #antifa smashing up the Democratic Party of Oregon headquarters. They bring weapons while their comrades use umbrellas to block surveillance video. Video by @Julio_Rosas11. #PortlandRiots pic.twitter.com/KdNNRgIEV0

Lest anyone believe that Antifa are mythical bogeymen constructed by the right, here is a protester carrying an Antifa flag.

In case it’s not clear who are leading the riots today. Video by @TheHannahRay in Portland: pic.twitter.com/nyquTJ7D7Y

In Seattle, activists who appear to be Antifa were captured on video trying to break into a building.

Seattle: #Antifa continue their march through the streets. A camera from a helicopter captures some of them trying to break inside a building. pic.twitter.com/33uvil7aPR

On-the-ground footage in Seattle shows the protesters that were involved.

A little over 8 hours since Joe Biden was inaugurated, and Seattle is on the move #Seattle #SeattleProtests pic.twitter.com/4ZDiXmaeua

The Democrats smeared 74 million Trump voters and equated peaceful protesters who happened to be caught up in the pre-planned siege on the Capitol building to “domestic terrorists” and “insurrectionists.”

“We know that the President of the United States incited this insurrection, this armed rebellion against our common country,” Speaker Pelosi claimed. “He must go, he is a clear and present danger to the nation that we all love.”

Pelosi claimed that those who breached the Capitol were “sent here, sent here by the President with words such as a cry — to fight like hell.”

Speaker Pelosi says there's a "big difference" in the evidence that could be used in the second impeachment trial of fmr. Pres. Trump.

"This year, the whole world bore witness to the president's incitement."https://t.co/fPaobFYwum

Besides the point that Trump specifically told those in attendance at his speech to “peacefully and patriotically make your voices heard,” the Democrats point to words that he used in his speech that are nearly ubiquitous in political parlance, like “fight.”

In over 80 rallies since the 2020 campaign began, over one million Trump supporters attended and there were scarcely any credible reports of violence.

The media’s hysterical smear of tens of millions of peace-loving Trump voters has been accompanied by a virtual black-out of dangerous and provably violent Antifa riots and radical BLM attacks on police officers.

It is an unsustainable level of propaganda. It is also no surprise that it is accompanied by a vigorous attempt to silence those who are able to point out the blatant contradictions.