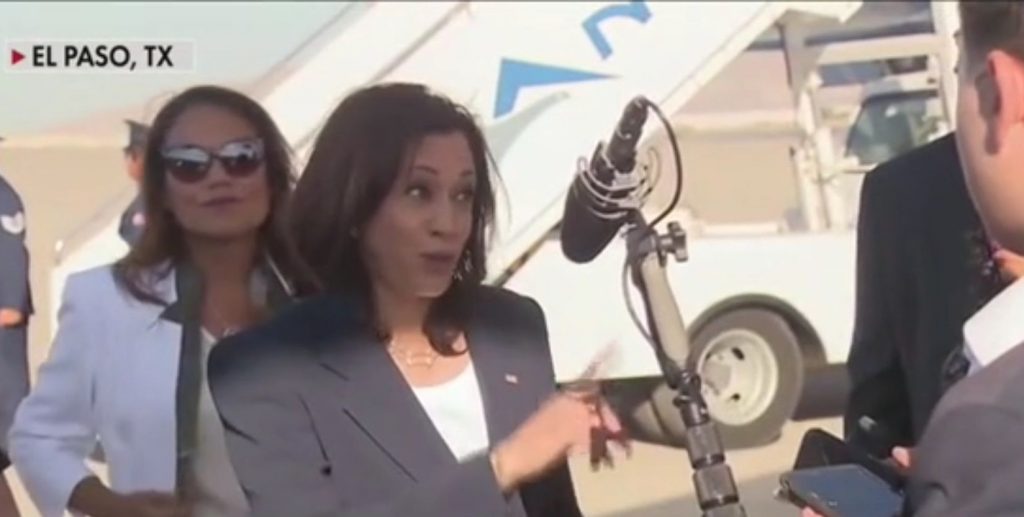 Kamala Harris finally made her way to the “border” as Vice President on Friday. She arrived in El Paso and held a press conference with reporters.

One of them happened to be Fox News’ Peter Doocy, who is one of the few reporters in the mainstream media willing to ask tough questions of the Biden administration. As he found out, Biden officials don’t like to be asked tough questions. Friday was no different. Watch:

“How did you decide that right now was the right time to make your first trip to the border?” Doocy asked.

“Well, it’s not my first trip. I’ve been to the border many times,” she deflected.

“As the Vice President. As the person in charge of the response,” he noted.

“So, the important aspect of this visit,” Harris said, with her voice wavering, “Is needing this visit after the work that we did in Guatemala and Mexico. Because as I’ve long said, I said back in March I was going to come to the border. So this is not a new plan.”

Harris also made sure to blame the previous Trump administration for the surge in border crossings that began under the Biden administration.

“Our administration — it is important to be clear — is working to build a fair and a functional, and a humane immigration system,” she claimed. “We feel very strongly about that. And, as you know, we inherited a tough situation.”

She continued to boast about actions the Biden administration is taking to curb illegal immigration at the border that appear to be largely fictional.

“In five months we’ve made progress, but there’s still much more work to be done, but we’ve made progress,” Harris claimed. “Family reunifications — and the secretary can talk about that incredible work that we’ve seen that he has helped facilitate by expediting the processing at the border.”