VP Kamala Harris Lets China Off the Hook for Covid, Says ‘It’s No One’s Fault’ That It Came to United States

Vice President Kamala Harris essentially absolved China of all responsibility for Covid-19 coming to the United States, whether it be for a Wuhan lab leak or for the cover-up of the virus, potentially for months in 2019.

Appearing on “Disgrace the Nation,” Harris told Margaret Brennan that she did not believe anyone was to blame for Covid-19. She was specifically asked if the “unvaccinated” were to blame.

WATCH: VP Harris tells @margbrennan that the current surge of COVID cases “is more about individual power and responsibility” then setting blame on the unvaccinated. pic.twitter.com/NJzhBfJL80

“I don’t think this is a moment to talk about fault,” Harris said. “It is no one’s fault that this virus hit our shores or hit the world.”

“I would not blame it on anyone in that way,” she continued. “But it is more about individual power and responsibility and the decisions that everyone has the choice to make.”

One of the reasons for the narrative shift is that the spike in Omicron cases in the U.S. has undermined all credibility for the argument that “vaccines” stop or even slow the spread. Therefore, it is impossible that the unvaccinated are responsible for the persistence of the “casedemic,” particularly as it is being equally found in vaccinated and boosted individuals.

The textbook case right now is Vermont, which is the most-vaccinated state. It is nonetheless seeing a massive surge in cases: 95% of those 12 and up are reported as vaccinated. Below are the results: 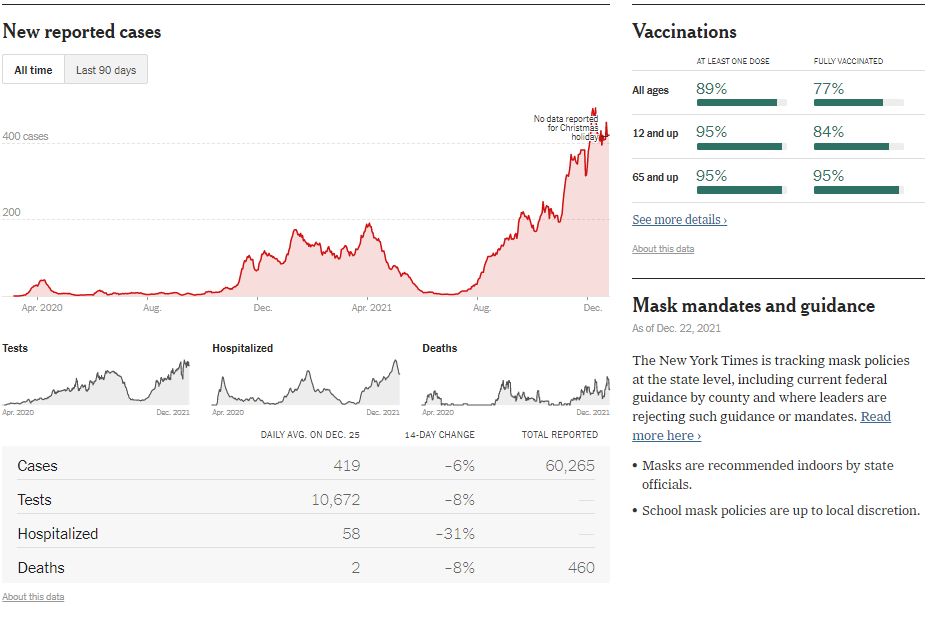 Then there is the issue of Kamala Harris letting the Communist Chinese off the hook for the suspected Wuhan lab leak and for its censorship of Covid-19 information, which had deadly results.

Nonetheless, there is solid evidence that China knew that a novel coronavirus was spreading in Wuhan months before the rest of the world.

In May 2019, there was a surge in PCR tests for coronaviruses purchased in the Hubei province – where Wuhan is the capitol – seven months before the Chinese Community Party (CCP) acknowledged the novel SARS-CoV-2 virus’s existence.

Most disturbing of all are the specific contractors of the PCR tests: CDC buyers and the People’s Liberation Army. Nikkei Asia provides the overview:

Two years later, in May 2021, Biden quietly ended its probe into the origins of the Covid pandemic with a ruling that it was ‘indeterminate’ what had happened. This effectively let China escape any accountability for the pandemic that has killed millions worldwide.

“Joe Biden‘s team shut down a State Department investigation into the Wuhan laboratory as a source of the COVID-19 outbreak,” according to the Daily Mail’s May report.

“Last fall, then-Secretary of State Mike Pompeo lead an investigation to answer whether China’s biological weapons program may have played a role in the pandemic, sources told CNN,” the report continued.

“But the probe was met with internal opposition by those concerned it was part of political effort by the Trump administration to blame China for the virus.”

“Three researchers from China’s Wuhan Institute of Virology became sick enough in November 2019 that they sought hospital care, according to a previously undisclosed U.S. intelligence report that could add weight to growing calls for a fuller probe of whether the Covid-19 virus may have escaped from the laboratory,” the Wall Street Journal reported.

In January, a New York Magazine story written by novelist Nicholson Baker raised the profile on the lab leak hypothesis.

“I keep returning to the basic, puzzling fact,” Baker wrote. “This patchwork pathogen, which allegedly has evolved without human meddling, first came to notice in the only city in the world with a laboratory that was paid for years by the U.S. government to perform experiments on certain obscure and heretofore unpublicized strains of bat viruses — which bat viruses then turned out to be, out of all the organisms on the planet, the ones that are most closely related to the disease.”

“What are the odds?” he added.

One well-credentialed scientist who appeared to back the possibility was Alina Chan, a scientist at the Broad Institute of MIT and Harvard.

“There is a reasonable chance that what we are dealing with is the result of a lab accident,” Chan said.

Of course, according to Kamala Harris and Joe Biden, whose son Hunter appeared to have illicit business dealings with the CCP, there is “nothing to see here” when it comes to Communist China’s involvement in spreading the Covid-19 pandemic.