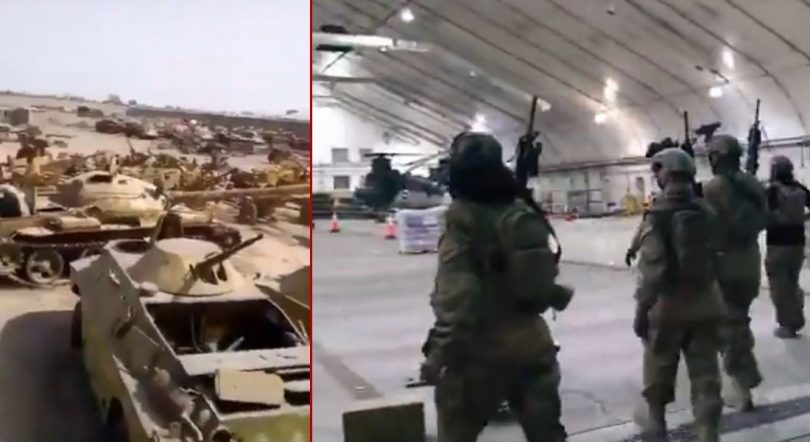 The Washington Post has been exposed for a ridiculous ‘fact check’ of a claim showing how dangerously incompetent the Biden administration has become.

The headline appears to say it all: “No, the Taliban did not seize $83 billion of U.S. weapons.” But what actually happened? Did the Taliban seize anything at all?

Knowing how headlines are abused on social media, the WaPo’s ‘fact check’ is obviously political cover for an administration that is already on the ropes. While Kessler gives the claim ‘three pinocchios,’ he should actually award it to himself, based on the substance of the fact check.

It wasn’t $83 billion, you see, it was “only” $65 billion worth of high-tech military hardware, which will undoubtedly be exploited by the Taliban and reverse-engineered by America’s enemies around the world. Not so bad, according to WaPo.

“We don’t normally pay much attention to claims made by the former president, as he mostly just riffs golden oldies. But this is a new claim,” Kessler writes. “A version of this claim also circulates widely on right-leaning social media — that somehow the Taliban has ended up with $83 billion in U.S. weaponry. (Trump, as usual, rounds the number up.)”

“The $83 billion number is not invented out of whole cloth,” Kessler admits. “But it reflects all the money spent to train, equip and house the Afghan military and police — so weapons are just a part of that. At this point, no one really knows the value of the equipment that was seized by the Taliban.”

Short story long, the estimate is closer to $65 billion, which the fact checker doesn’t say outright in his “three pinocchios” article. The real figure was pointed out by several conservatives who were waiting to “pounce” on the story:

Pretty sure this headline and conclusion would have been way different if Trump was still in office. https://t.co/jXGOpJGpEl

On August 19th Biden told ABC “If there's American citizens left [on August 31], we're gonna stay to get them all out." That could be the lie of the decade.

Instead we have this quibble over whether we gave the Taliban $83B in equipment to use against us or just like $60B. https://t.co/k9nlnhk9rS

Yes yes, 65 not 83. But Glenn I really need to know. Did Tim Scott and his family ever experience “real” racism?!?

So the "fact-check" here is that it's actually $65 billion. No, I'm not kidding. Glenn Kessler chose to "fact-check" Donald Trump over a dispute in totals instead of any of the Biden administration's lies over the last 2 weeks. Glenn Kessler is a joke. Don't be Glenn Kessler. https://t.co/dywlXS10TJ

Yes yes, 65 not 83. But Glenn I really need to know. Did Tim Scott and his family ever experience “real” racism?!?

Next time you liars want to claim the value of a fleet of Black Hawk helicopters and C-130s, use the Kelly Blue Book WHOLESALE price, not retail

The videos of Taliban fighters confiscating out military hardware and using it has outraged U.S. taxpayers whose money was spent to arm and equip an Islamic terrorist state.

These are Tanks at Kandahar Airport which Joe Biden left for the Taliban fighters. pic.twitter.com/QQ2mYlnCfI

WARNING 🚨
DO NOT be fooled!
This video does NOT show *American* troops in Kabul.
These are TALIBAN troops wearing AMERICAN tactical gear, brandishing AMERICAN weapons and AMERICAN night vision goggles & inspecting the helicopters AMERICANS left for them:pic.twitter.com/qn30T1jAKU