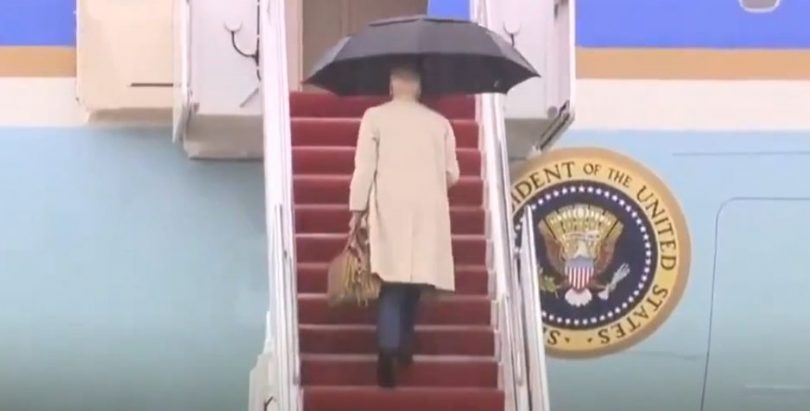 Joe Biden had a close call walking up the steps to Air Force One in the rain. Watch:

The harrowing incident was captured by Caleb Hull. It may just be the saddest video of his administration.

Biden’s legs buckled while he was struggling to carry a bag and hold an umbrella. He couldn’t even hold onto the rail because his hands were full.

It looked like he might have a repeat of the debacle in mid-March, when he fell repeatedly.

The 78-year-old Biden had to cling to the guardrail to keep from falling completely each time.

He fell a total of three times. All of the soldiers and dignitaries stood and merely watched as the president struggled to make it up the stairs. Just like they did as he walked up the stairs today and nearly fell again.

Biden once mocked Trump and boasted he could climb up ramps better than the former president. Apparently not.

FLASHBACK -> Biden mocks Trump's ramp walk at West Point and claims he's stronger: "Look at how he steps and look at how I step. Watch how I run up ramps and he stumbles down ramps. Come on." pic.twitter.com/U7CL0dBSQA