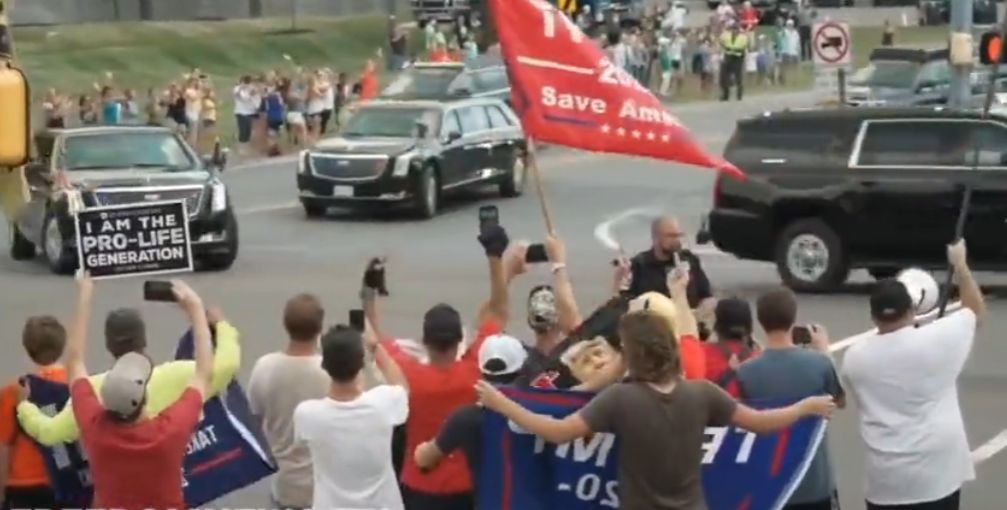 Joe Biden may have grown up in Scranton, Pennsylvania, but the folks about an hour south on I-476 in Allentown didn’t show much respect for the home state ‘hero’ when the president’s motorcade passed by on Wednesday.

Watch as Biden’s motorcade passed by and a throng of Trump supporters showed him how much respect they have for the president (caution: strong language):

The folks met Biden with “jeers and middle fingers,” as was described by Jewish Deplorable on Twitter.

Biden was in Pennsylvania to pitch his massive infrastructure package. On Wednesday, Biden spoke at a Mack Truck facility in the Lehigh Valley and bumbled through a speech.

Standing in front of a backdrop of an American flag and two semi-tractor trailers, he forgot the ‘three reasons’ why he ran for president.

“Secondly, to rebuild the backbone of the country,” he continued. “Hard working middle class folks who built this country.”

There would never be a third reason.

Discontent with Joe Biden and his policies are obviously growing. On  Monday, Alabama coal miners protested at Black Rock headquarters in New York.

Also on Monday, pro-Cuba protesters demonstrated at the White House against the Biden administration’s immoral lack of aid to the freedom fighters. The protesters had begun to gather in Washington D.C. on Sunday night.

“Thousands of anti-Cuban regime protesters gathered outside the White House Sunday and stayed overnight into Monday to pressure Joe Biden to do more to address socialist Miguel Díaz-Canel’s actions against the people of Cuba,” the Daily Mail reported.

As the Biden regime escalates its anti-American and unconstitutional attacks on the American people, expect more protests.

President Biden Says He Ran for President for Three Reasons, Forgets to Name Third One