On January 31, 2020, an article was published in Science about investigation into the origins of the COVID-19  outbreak. Entitled “Mining coronavirus genomes for clues to the outbreak’s origins,” it was an article that would be shared with National Institutes of Health director Dr. Anthony Fauci, as was recently disclosed in a publicly released email trove.

Curiously, an evolutionary biologist at Scripps Research named Kristian Anderson, who was cited in the article, appears to have drawn conflicting conclusions about (potentially) “engineered” viral parts of the SARS-CoV-2 strain of coronavirus. An email from January 31st and a tweet by Anderson on the same day are raising questions about what influence Dr. Fauci might have had in stemming the line of inquiry.

Dr. Fauci mentioned the above-referenced article to Kristian Anderson in regards to an upcoming call. “This just came out today. You may have seen it. If not, it is of interest to the current discussion.”

This was Kristian Anderson’s response from the email exchange:

Hi Tony,
Thanks for sharing. Yes, I saw this earlier today and both Eddie and myself are actually quoted in it . It’s a great article, but the problem is that our phylogenetic analyses aren’t able to answer whether the sequences are unusual at individual residues, except if they are completely off. On a phylogenetic tree the virus looks totally normal and the close clustering with bats suggest that bats serve as the reservoir. The unusual features of the virus make up a really small part of the genome (<0.1%) so one has to look really closely at all the sequences to see that some of the features (potentially) look engineered.

We have a good team lined up to look very critically at this, so w e should know much more at the end of the weekend . I should mention that after discussions earlier today, Eddie, Bob, Mike, and myself all find the genome inconsistent wit h expectations from evolutionary theory . But we have to look at this much more closely and th ere are still further analyses to be done, so those opinions could still change.

As has been reported widely, the email has been held up as evidence that Fauci was warned that the coronavirus strain may not have purely natural origins. Kristian Anderson even touted one of the headlines, although it is not clear if he was being facetious:

“In an apparent plot twist, I’m evidently the hero now,” he said. But the remark was not a denial that the implications were taken out-of-context, which has become a common defense from Fauci.

On the same day as Anderson’s email was sent, as well as the publication of the Science article, the scientist responded to a researcher who was adament that the line-of-inquiry into potential unnatural origins of SARS-CoV-2 was driven by “Trumpian” purveyors of “conspiracy theories.”

Dr. Tara C. Smith tweeted a pointed response to Senator Tom Cotton’s correct observation that “we still don’t know where coronavirus originated… I would note that Wuhan has China’s only biosafety level-four super laboratory that works with the world’s most deadly pathogens, to include, yes, coronavirus”:

A Twitter user questioned Smith by pointing to an article by James Lyons-Weiler, which argued that it was “most likely” that the coronavirus strain was “a recombined virus made in a laboratory for the purpose of creating a vaccine.”

Professor rejected this hypothesis with the ad hominem argument that Weiler was an “antivax grifter” and then requested the advice of an expert like Anderson to weigh in.

It might surprise people to see what Kristian Anderson said in public when contacted by Professor Smith to comment on the article’s assertion. (I verified that Anderson tweeted it.) 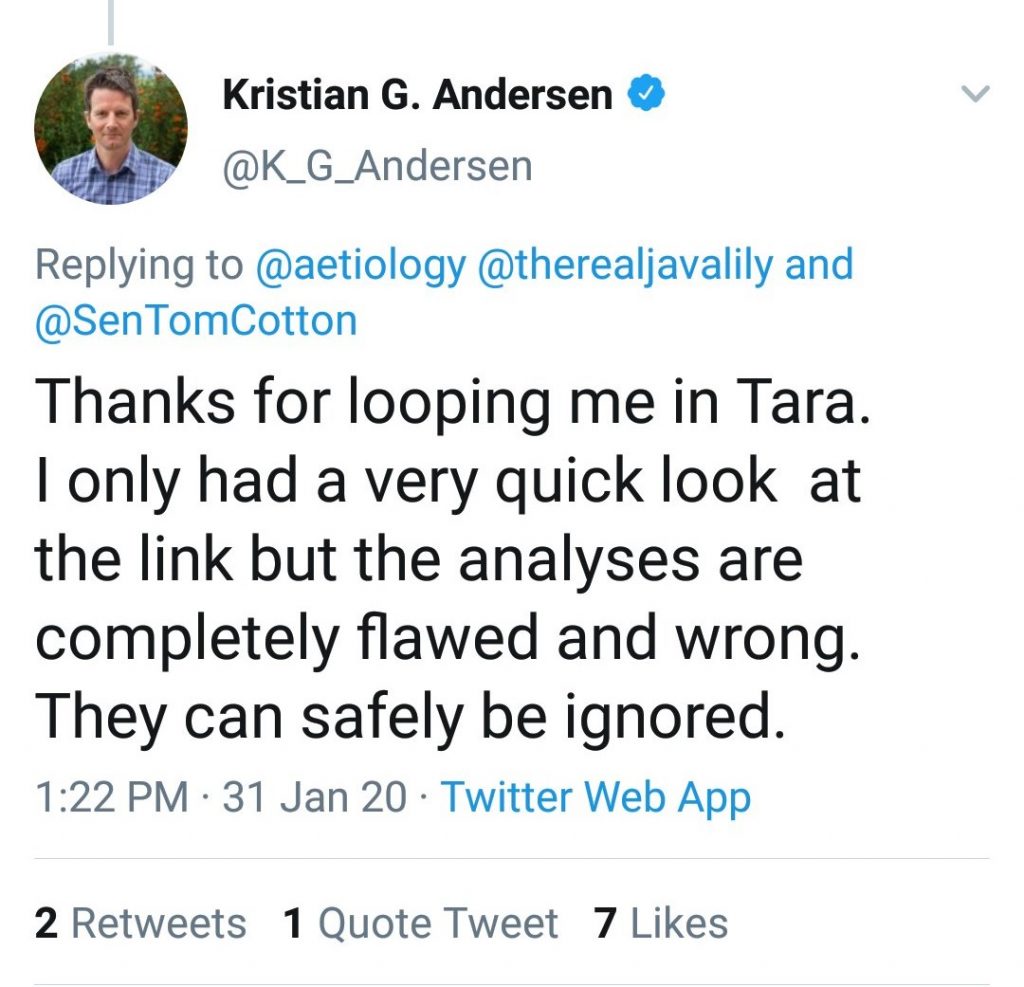 “Thanks for looping me in Tara,” Anderson responded. “I only had a very quick look at the link but the analyses are completely flawed and wrong. They can safely be ignored.”

It might be said that this is Twitter, after all, and the level of precision about the topic is clearly going to lack that of a scientific forum, such as a response letter published in journal peer-review. Nonetheless, it does raise questions about the content of Anderson’s calls with Dr. Fauci, and why it took so long for what is now considered to be a strong hypothesis to gain traction in the scientific community.

The U.S. media, for example, the Washington Post’s casual dismissal of such lines of inquiry with blaring headlines like, “Experts debunk fringe theory linking China’s coronavirus to weapons research,” did much to chill the open-minded investigation of the matter. Indeed, Professor Smith pointed to this very article in an exchange on Twitter, showing how the deployment of “conspiracy theory” has been weaponized to shut down valid questioning, even of an opaque communist regime like China’s.

Nonetheless, the Wuhan laboratory’s research, as well as its potential Chinese military bioweapons applications, have eventually garnered heightened scrutiny after more than a year of media foot-dragging on the issue. This is not to argue that the coronavirus strain was due to a planned bioweapons deployment, rather than an accidental release from a laboratory doing research on vaccines.

As the Business Standard reported about a new academic study on the subject:

As calls to trace the origin of the SARS-CoV-2 virus grow around the world, a new study, conducted by British professor Angus Dalgleish and Norwegian scientist Dr Birger Sorensen, claims that the virus was created in a lab and has “no credible natural ancestor”.

The Daily Mail cited the study and reported that the virus was created by Chinese scientists who were working on a “Gain of Function” project in the Wuhan lab. The research, according to the report, claims that scientists took a natural coronavirus “backbone” found in Chinese cave bats and spliced onto it a “new spike”, turning it into the deadly Covid-19. The study claims that it found “unique fingerprints” in Covid-19 samples, which, according to them, could have only arisen because of manipulation in a lab.

“The study alleged ‘deliberate destruction, concealment or contamination of data’ at Chinese labs and notes the silencing and disappearance of scientists in China who spoke out about the activities,” said news agency ANI. The 22-page paper was published in the Quarterly Review of Biophysics Discovery.

The real question about the Wuhan laboratory at this point is why it took over a year for an obvious potential origin for the coronavirus to get the scrutiny that it deserved. As the Fauci email exchange shows, the scientific community played no small role in chilling public discussion of one of the deadliest and most politically consequential pandemics in world history.