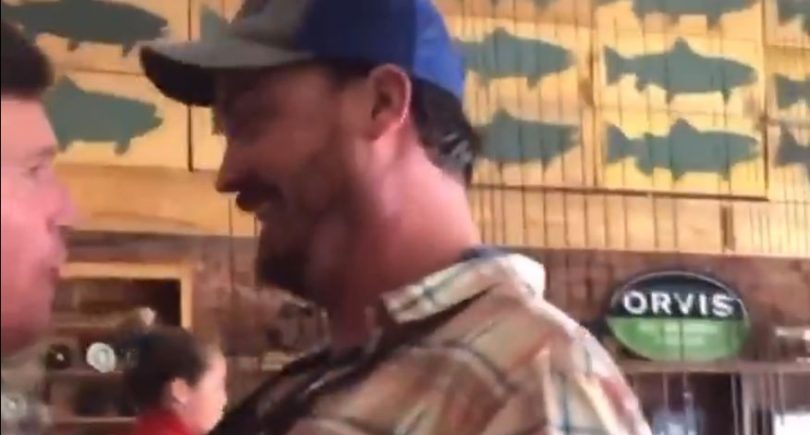 Tucker Carlson got into a tense confrontation at a sporting goods store in Livingston, Montana.

“You are the worst human being known to mankind. I want you to know that,” Dan Bailey told Tucker.

Dan Bailey posted the video on Instagram with a truly classless comment. “It’s not everyday you get to tell someone they are the worst person in the world and really mean it! What an asshole!” Bailey said.

Bailey had more to say about Carlson on his Instagram video excerpt: “This man has killed more people with vaccine misinformation, he has supported extreme racism, he is a fascist and does more to rip this country apart than anyone that calls themselves an American.”

But what Bailey didn’t say is how Tucker Carlson showed him who the bigger man was with his reaction.

“I don’t care, man,” Bailey said as he got in Carlson’s face. “Dude, you are the worst human being known to man. I want you to know that.”

“I’m not going to debate you,” Carlson said and then turned to smile at the person recording the video.

“I don’t care that your daughter’s here,” Bailey ranted. “What you’ve done to people’s families, what you have done to everybody else.”

“Son,” Carlson said and walked away.

“Don’t call me son,” Bailey said and followed him in a threatening manner. The video then cuts out.

Of course, Tucker Carlson’s biggest ‘crime’ to such people is not participating in the group think of the mainstream media. Although the sporting good store was ironically named Dan Bailey’s Fly Shop, the store owners denied that the man had any affiliation with the store.

“This person has no affiliation with our business, other than he shares the same name as our founder, who passed away in 1982,” the store statement from the owner Dan Sexton said. “To be clear, we treat every customer equally and respectfully. Our staff was professional and cordial to Mr. Carlson, as we are with all of our customers.”

In November 2018, violent Antifa protesters gathered around Tucker Carlson’s home and shouted threatening comments with his family there.

“Tucker Carlson, we will fight. We know where you sleep at night,” the radical leftists yelled while Carlson’s wife Susie hid in a pantry and called the police. “Racist scumbag, leave town!” the left-wing protesters screamed.

Tucker Carlson reported that the protesters vandalized his home, broke his oak door, and even threatened the family with pipe bombs.

“Here’s the problem, I have four children,” he told Fox News. “I never thought twice about leaving them home alone, but this is the reaction because this group doesn’t like my TV show.”

Tucker is an avid fly fisherman who was famously spotted in 2013 and got in a genial back-and-forth with a left-wing ‘journalist.’

“I was on Central Park South on the wall and saw this guy fly fishing,” Boots said. “I thought, ‘Wow I’ve never seen this before.’ I didn’t know if it was legal, so I started taking video,”

It was legal and he had a license to do so. The man taking the video and Tucker Carlson got into a conversation that only goes to show how reasonable and genial the Fox News host is in person.