The Capitol Riots on January 6 will go down in history as one of the most finely dissected events in modern times. Despite the public scrutiny of the events, the FBI refuses to release over 14,000 hours of footage. But in spite of the limitations of the federal government’s lack of transparency, there are new videos being released that are dramatically changing our understanding of the seminal event.

It appears now from a time-stamped series of videos based on a restored Parler video archive that the Capitol protests escalated into riots in conjunction with the reckless and indiscriminate police discharge of pepper spray and stun grenades into the the crowd.

The police charged with protecting the Capitol Building were put into a no-win situation, due largely to incompetent leadership and ostensibly political decision-making. There is no disputing that.

It is beyond the scope of this article, however, to rehash the poor security decisions preceding the long-expected gathering of Trump supporters and extremists around the Capitol building on the day that the Electoral College was expected to certify the 2020 election. The National Guard and Capitol Police presence should have been larger in advance, as Donald Trump was reported to have desired prior to the event. Those officers and troops should have been better equipped and prepared to handle the expected mob.

The time-stamped videos preceding and following the Electoral College certification tell the tale surrounding the escalation of the Capitol Riots scene. There are a few important times to reference, as a New York Times timeline points out. (It should be said that the NY Times consistently distorts the incidents for effect.)

Beginning at around 12:49, West of the Capitol grounds, law enforcement responds to a pipe bomb threat reported to be at the RNC and DNC headquarters. This is a classic diversionary tactic used by extremist and terrorist groups. But to this day, the FBI still has not arrested the responsible subject(s). 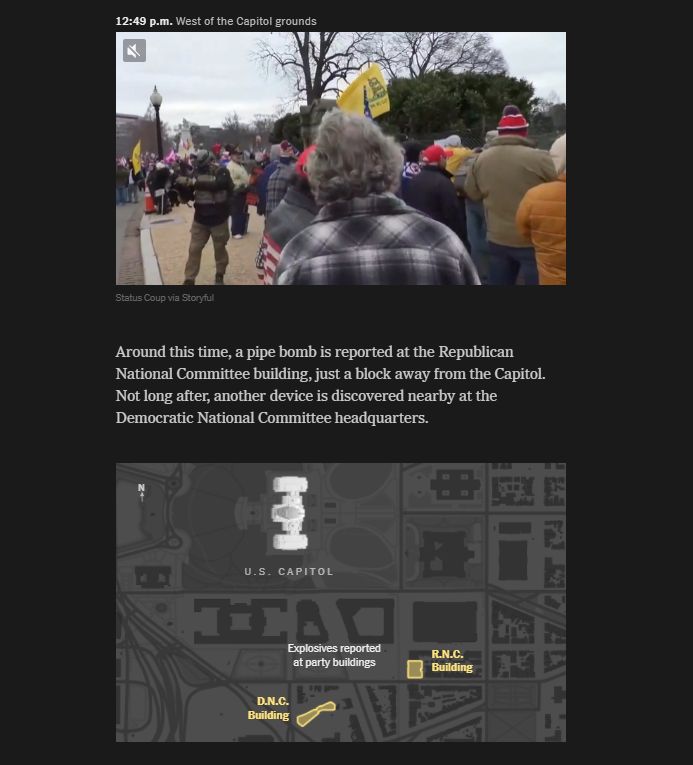 It is important to bear in mind that “the discovery of a pipe bomb outside the Republican National Committee headquarters in Washington on Jan. 6 prompted police to evacuate two congressional buildings, not, as was believed, the attack on the U.S. Capitol,” as the Washington Examiner reported in February.

The New York Times reports that the “first barriers were breached” at 12:53 p.m. at the Northwest side of the Capitol. 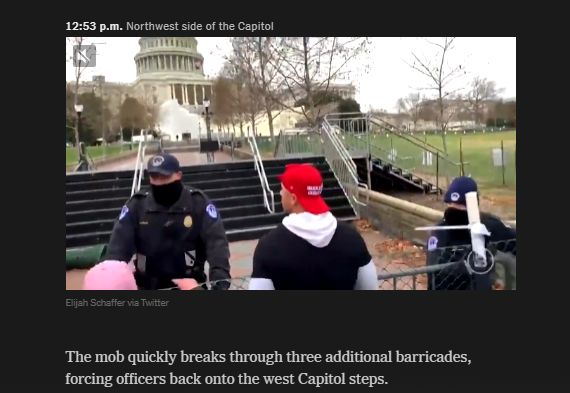 The “breach” appears to have been conducted by one young, muscular, clean-cut man deciding to take off his backpack and lead protesters to push against the barricade.

The New York Times then claims “the group clashes with a small contingent of officers.” What the video clip actually shows is a police officer shoving back an old man. 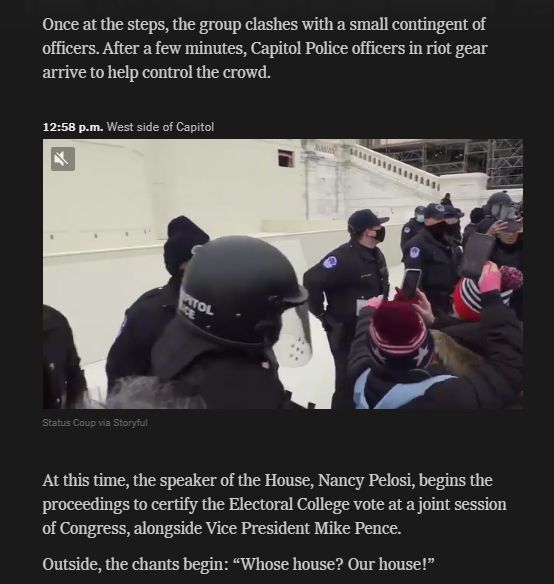 The NY Times then claims that Trump’s “call to action” was at 1:12 p.m. Of course, this is nearly twenty minutes after the purported first “breach” of the barricades. The speech was given a mile and a half away. 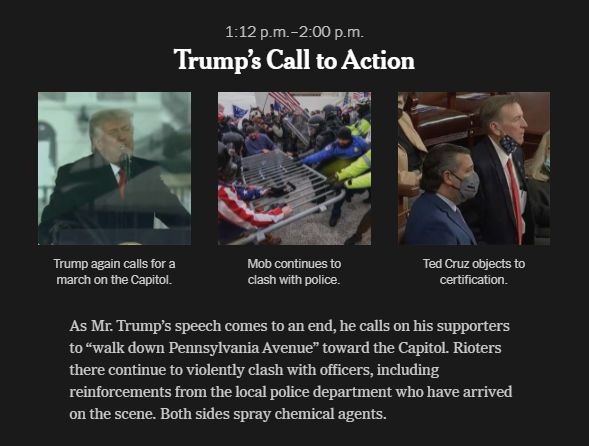 The Washington Post reports that “hundreds” of Trump supporters begin filing into the Capitol grounds at 1:00 p.m. This contingent would obviously include far-right and other extremists.

Hundreds of Trump supporters have stormed the barricades at the back of the Capitol and are marching toward the building. pic.twitter.com/68nB7QyiP9

Then, at 1:03 p.m., Nancy Pelosi begins certifying the state election results, in conjunction with Vice President Mike Pence, in the capacity of his role as President of the Senate.

This is where it gets interesting. At 1:11 p.m., all appears to be relatively calm on the East side of the Capitol.

On the West side of the Capitol building, shortly thereafter, there are videos of police and extremists exchanging chemical spray. This is at 1:15 p.m. 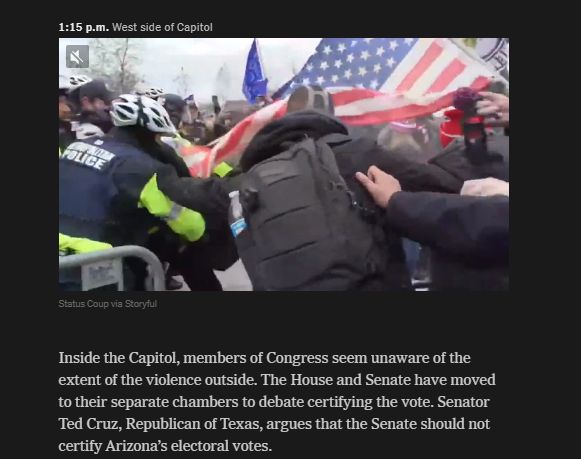 Meanwhile, on the East side, the crowd is growing louder, with flag-waving and chants of “USA!” but appears to be relatively under control. This is at 1:17 p.m. Watch:

At 1:19 p.m., there is video of police training pepper ball guns and stun grenade launchers on the protesters. You can hear demonstrators shouting, “Peaceful protest!” repeatedly.

Then, at 1:24 p.m., video obtained by Jack Posobiec shows a crowd that has still remained relatively restrained.

There is still raucous chanting and people are upset, but it is still fairly under control. It is not yet a “riot.”

Then, the stun grenades start flying. This video of a flash bang being launched directly at a protester is at 1:25 p.m. You can hear the crowd booing the police.

“Keep them coming motherf***ers,” a man yells before a stun grenade is launched at him.

Another video from 1:25 p.m. shows the crowd being hit with flash bangs and a woman complaining about the police attacking “Blue Lives Matter” supporters.

“They’re shooting into their own people,” she laments. “We’re supposed to be supporting Blue Lives Matter. We represent Blue Lives and this is what they do to us!”

“When Black Lives Matter say Blue Lives don’t, we say you do,” she shouted. “And this is what you do?”

While the videos do not capture the entire picture of the events of January 6th, they certainly add a more nuanced view of how the riots appear to have escalated. It can certainly be argued that if the police had fired indiscriminately into a Black Lives Matter protest, the media would not have been surprised if that protest had escalated into a riot.

But since the American media has nothing but antipathy for Trump supporters, it routinely fails to scrutinize the complicated dynamics of the January 6th event, as well as the roles of extremists, agitators and FBI informants in turning the political protest into something much darker.