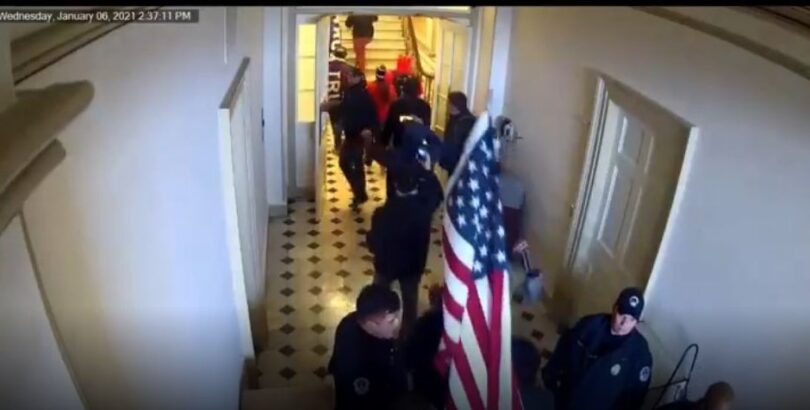 An unedited surveillance video from January 6 shows Capitol Police officers not only letting protesters walk unimpeded into the Capitol building, but one officer actually invites them in by waving them along. The previously suppressed and newly released video can be watched below:

The footage was reported by Buzzfeed’s Zoe Tillman, but does not note that the Capitol Police officers appear entirely complicit in allowing the protesters unfettered access into the Capitol building.

“A pair of US Capitol surveillance videos disclosed last week by prosecutors offer a new perspective into how a mob overwhelmed police officers and repeatedly breached a main access point to the building during the Jan. 6 riots,” Buzzfeed reports.

“The footage shows a small team of US Capitol Police officers vastly outnumbered by the crush of people trying to get in,” Tillman says, although the footage does not comport with this claim. “There are at most five officers in the frame at any given moment; hundreds of people flow through that entry point on the Upper West Terrace of the Capitol over the span of roughly 13 minutes. The rioters in large part do not turn around when police try to block their path but appear to argue and negotiate before they push past officers or until the officers retreat.”

“The videos don’t have sound, but they show tense verbal exchanges as the officers make several attempts to stop the mob from getting inside,” the reporter claims.

However, police officers did not try to significantly block or obstruct the protesters’ path. In fact, you can see an officer waving the protesters along at about the 1:00 mark in the video. The surveillance videos show an orderly procession into the Capitol building, no violence to speak of, and people strolling around calmly within the building.

More footage from the Capitol riots throws further doubt on the mainstream media’s narrative that the unarmed protesters entering the Capitol building on January 6th constituted a violent “insurrection.”

“One officer, identified in the video and confirmed by charging documents as Officer Keith Robishaw, appears to tell Chansely’s group they won’t stop them from entering the building,” the report noted.

“This has to be peaceful,” Chansley yelled at the crowd. “We have the right to peacefully assemble.”

Footage taken inside the Capitol building DC on January 6. They have held numerous citizens, some who didn't enter the building, for months with no bail under the guise of the 'extreme & hostile event' they claim occurred. pic.twitter.com/UX1RTsZoJ8

“Robishaw and other officers calmed the protestors somewhat and directed them to leave the area from the same way they had entered. Chansley approached Officer Robishaw and screamed, among other things, that this was their house, and that they were there to take the Capitol, and to get Congressional leaders.”

“Chansley later is seen entering the Senate chambers with a police officer behind him; he led several protesters in prayer and sat in Vice President Mike Pence’s chair,” the report continued.

The optics are striking: Capitol police stood around as protesters entered the Senate chambers and made speeches. Dozens entered the Capitol building after literally having the door held open for them, and then merely walked in a single file line and took pictures.

In fact, the FBI has not charged any of the protesters with “insurrection” or “treason”; the most widespread investigation in U.S. history, according to the bureau, has been unable to turn up any evidence of a centralized plot to install Donald Trump.

“The FBI has found scant evidence that the Jan. 6 attack on the U.S. Capitol was the result of an organized plot to overturn the presidential election result, according to four current and former law enforcement officials,” Reuters reported.

The mainstream media has colored the January 6 riot an “insurrection” and an attempted “coup,” while claiming that U.S. Congressional members were in mortal danger. But there were disparate groups at the Capitol building on January 6: One was a group of Trump supporters who were let into the Capitol building and who were later charged with “trespassing” and “parading.” Then there were also fringe extremists who caused disruption and chaos, but not necessarily with the aim to install Donald Trump by force.

If this was a “coup” attempt, then these Capitol Police officers who ushered the protesters in should be charged with “aiding and abetting” the commission of a felony. The fact that they have not been charged with such crimes, and that such video as was released today was suppressed, should tell the American people all they need to know about the U.S. government’s narrative about January 6.

The FBI Finally Proves That Donald Trump Had Nothing to Do with Jan. 6 ‘Insurrection’