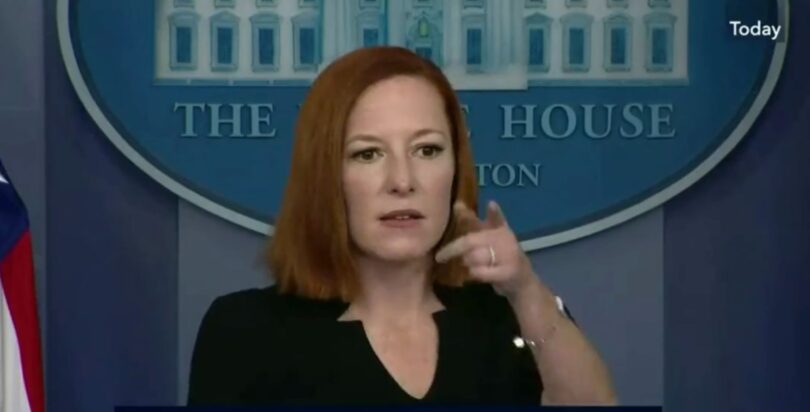 But that now appears to be very much on the table, should the Republican Party somehow not screw things up and retake the House of Representatives in 2023.

Psaki reacted to a reporter pointing out that Senator Ted Cruz had recently predicted that the ‘impeachments would begin’ as soon as the GOP get their hands on the Speaker’s gavel. She lashed out at the senator by name for the impeachment threat. Watch:

“Well, our reaction is: Maybe Senator Cruz can work with us on getting something done on comprehensive immigration reform and putting in place measures that will help make sure smart security is what we see at the border, taking a more humane approach to the border instead of name-calling, accusation calling, and making predictions of the future,” Psaki replied.

The Texas Republican gave his pronouncement of impending impeachment charges during his recent “Verdict with Ted Cruz” podcast. Cruz said that he is “very optimistic about 2022,” and added, “I put the odds of the Republicans winning the House at 90/10 and it may even be higher than that.”

“If we take the House, which I said is overwhelmingly likely, then I think we will see serious investigations of the Biden administration,” he added, then gave his prediction those would lead to impeachment.

He also said that “whether it’s justified or not, the Democrats weaponized impeachment” against then-President Donald Trump. The Democrats impeached him not just once, but twice for “wrongdoing.” Trump was exonerated by the Senate’s vote after two trials.

“They used it for partisan purposes to go after [former President Donald] Trump because they disagreed with him. One of the real disadvantages of doing that is the more you weaponize it and turn it into a partisan cudgel, you know what’s good for the goose is good for the gander,” Cruz said.

“I think there will be enormous pressure on a Republican House to begin impeachment proceedings. I think there are potentially multiple grounds to consider for impeachment. Probably the most compelling is the utter lawlessness is President Biden to enforce the border. His decision to just deify immigration laws,” Cruz continued, outright predicting that Republicans will retaliate against Democrats for impeaching Trump.

“That’s probably the strongest grounds right now for impeachment but there may be others,” he noted further.

Cruz is not the only Republican to broach the subject of impeaching Biden. In late October, Georgia Republican Rep. Marjorie Taylor Greene introduced articles of impeachment, alleging that Biden committed “treason.”

“I have introduced House Res. 57, these are Articles of Impeachment on President Biden,” Greene said. “For abuse of power in regards to his willingness to use his position of power to aid his son Hunter Biden in his business dealings.”

“I have also introduced another Article of Impeachment on President Biden, which is H. Res 597,” she continued. “This has to do with the national security crisis that President Biden has created with regards to the extreme threat at the southern border.”

As far as many Americans are concerned, the sooner the tyrannical Democrats lose their control over those three branches of power, the better. Trump supporters must be chomping at the bit to “let the impeachments begin.”

Nancy Pelosi is Again Confronted on Not Giving Americans ‘Full Story’ of Jan. 6