Watch: Jen Psaki Runs from Press Conference as Reporter Confronts Her on Fauci Lying to Congress 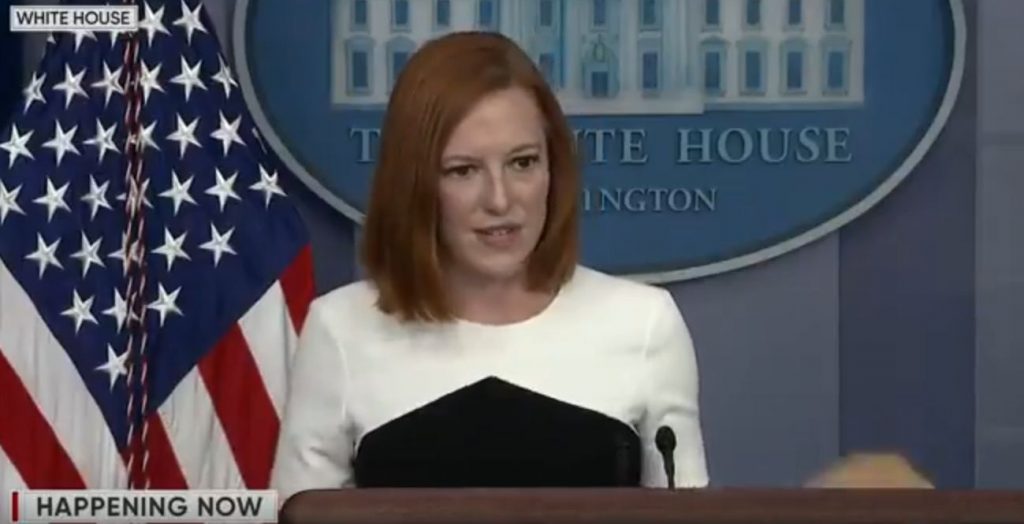 White House Press Secretary packed up her stuff and high-tailed it out of a press conference on Wednesday, when a reporter decided it was high time to ask her about the most pressing question of the day: What is going to happen to Dr. Anthony Fauci, now that it is irrefutable that he lied? Watch:

“The story about Dr. Fauci yesterday in The Intercept, documents released that show he was untruthful…”

The door closing behind Psaki and her entourage would be her answer. That is to say, no answer.

Newly released documents from The Intercept reveal in depth how the National Institute of Allergy and Infectious Disease, headed by none other than Dr. Anthony Fauci, funding the U.S.-based non-profit EcoHealth Alliance performing “high-risk” research with the Wuhan Institute of Virology in China.

Although The Intercept’s report itself is sparse detailing the contents of the documents, they provide a clearer picture of the kind of research being conducted by EcoHealth Alliance, the Wuhan Institute of Virology, and even the Wuhan University Center for Animal Experiment, which now becomes another potential source of a lab leak for the SARS-CoV-2 virus.

The grant proposals and reporting contained in the documents show how cozy Dr. Peter Daszak’s group was with the Wuhan Institute of Virology. The documents also clearly bear the fingerprints of NIAID, which Dr. Fauci leads.

“The Wuhan Institute of Virology, Chinese Academy of Sciences, has an high interest in working with Eco Health Alliance and its scientists to identify and prevent the transmission of bat coronaviruses to human populations globally,” Dr. Yanyi Wang, Director of the Wuhan Institute of Virology writes to Dr. Peter Daszak. “In particular, the NIAID funded R01 renewal proposal entitled ‘Understanding the risk of bat coronavirus emergence‘ will provide an excellent opportunity to achieve these goals.”

The newly released EcoHealth Alliance documents shine an even brighter spotlight on Dr. Fauci, who has made heated denials about NIAID’s funding being utilized at the Wuhan laboratory, and specifically, for risky “gain-of-function” research.

Before Congress, Dr. Fauci got into a charged confrontation with Dr. Rand Paul over the matter of gain-of-function funding.

Dr. Richard Ebright, Board of Governors Professor of Chemistry and Chemical Biology at Rutgers University, lays out how the new documents show that Dr. Fauci and Dr. Francis Collins have been “untruthful” about funding gain-of-function research.

…and thus not only was reasonably anticipated to exhibit enhanced pathogenicity, but, indeed, was demonstrated to exhibit enhanced pathogenicity.The materials further reveal that the the grants also supported the construction–in Wuhan–of novel chimeric MERS-related coronaviruses that combined spike genes from one MERS-related coronavirus with genetic information from another MERS-related coronavirus. The documents make it clear that assertions by the NIH Director, Francis Collins, and the NIAID Director, Anthony Fauci, that the NIH did not support gain-of-function research or potential pandemic pathogen enhancement at WIV are untruthful.

It is now proven beyond a shadow of a doubt that Dr. Fauci misled Congress about funding the Wuhan laboratory’s risky experiments on coronaviruses. Whether or not he is forced to resign, he should not longer have the trust of the American people.