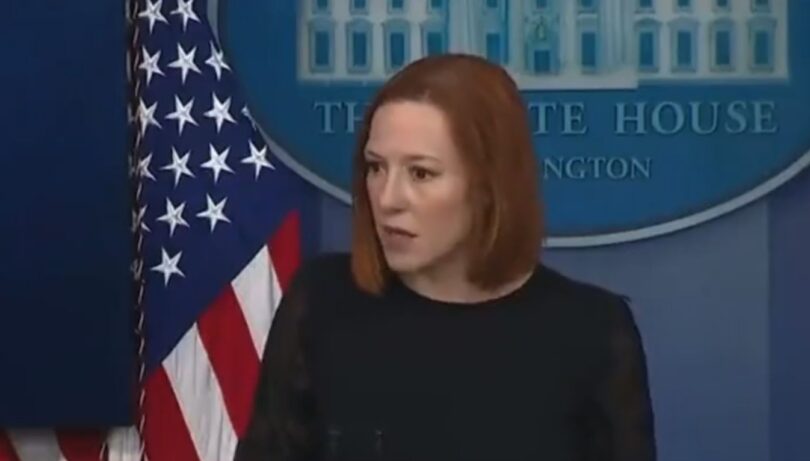 On Thursday, the Supreme Court struck a blow against Biden’s vaccine mandate for large employers. Then, Sinema driving a dagger through the heart of filibuster changes led Joe Biden to all but concede defeat for a federal elections takeover.

Psaki today lashed out against the Supreme Court by using dishonest language that is tantamount to fraudulent advertising for the vaccines. Watch:

“So, President Biden, you will see this in his statement, will be calling on and will continue to call on businesses to immediately join those that have already stepped up, including one-third of Fortune 500 companies,” she continued. “To institute vaccination requirements to protect their workers, protect their customers and communities.”

Psaki is clearly insinuating that vaccines work to keep others safe. This is absolutely, scientifically untrue.

Indeed, a federal court earlier issued a stay on the healthcare facilities mandate based in part that the government could not show that vaccines stopped or slowed the spread of the virus. Judge Matthew Schelp nailed the irreconcilable legal and moral issues with the Biden administration’s  issuance of the unconstitutional federal vaccine mandates.

“In general, the overwhelming lack of evidence likely shows CMS [Center for Medicare and Medicaid Services] had insufficient evidence to mandate vaccination on the wide range of facilities that it did. Looking even beyond the evidence deficiencies relating to the specific facilities covered, the lack of data regarding vaccination status and transmissibility—in general—is concerning. Indeed, CMS states that ‘the effectiveness of the vaccine[s] to prevent disease transmission by those vaccinated [is] not currently known.’ CMS also admits that the continued efficacy of the vaccine is uncertain.”

“No one questions that protecting patients and healthcare workers from contracting COVID is a laudable objective,” the judge added. “But the Court cannot, in good faith, allow CMS to enact an unprecedented mandate that lacks a ‘rational connection between the facts found and the choice made’.”

But the court case understates the evidence that vaccines don’t stop or even slow the spread of the Omicron and Delta variants. A comprehensive Harvard-led study showed this to be the case without a doubt. The researchers found that “the trend line suggests a marginally positive association such that countries with higher percentage of population fully vaccinated have higher COVID-19 cases per 1 million people.”

Furthermore, the NCAA recently acknowledged reality by stating that vaccinated immunity and natural immunity are equivalent. Private businesses could do worse than offering this compromise, while noting that natural immunity has been shown to last longer than vaccinated immunity, while prior infection to Omicron has been shown to transfer immunity to known other variants, such as Delta.

Alternatively, private businesses could also stop acting like fascist instruments of the U.S. government and allow human beings to make their own healthcare decisions since it is none of their business.