Watch: Kamala Harris Bursts Out Laughing in Speech on the Deadly Serious Threat of ‘Climate Change’

Vice President of the United States Kamala Harris on Wednesday addressed the country on the purportedly dire threat posed by climate change. In the middle of her speech, she couldn’t help but burst out laughing. Watch:

“And I remember watching in the Oakland Hills, Northern California that the the landscape turning from green to brown, and everyone from my mother, our teachers, the radio DJs at KDIA,” she said and cackled loudly. “Lucky 13… saying how important it was to conserve water.”

Then, the vice president turned to the threats of droughts and water shortages, which have hit Californians hard in large part due to the government’s mismanagement.

“Across, the West, we have seen the terrible cost of the climate crisis,” she claimed. “And I’ve visited many of the places where we have seen the wildfires, where families have lost their homes and their loved ones, where entire communities have been wiped out. I’ve met with and talked with the firefighters. My brother-in-law is a firefighter in California. And many of them who work 24hr shifts in some of the most dangerous conditions that you can imagine to keep us safe.”

“Farmers and agricultural workers who lost their livelihoods because the rains just simply did not come,” she added. “And communities who have felt firsthand how the economic impact of water scarcity ripples out, driving up prices and driving a real sense of urgency about what also results in terms of lack of opportunity.”

However, Harris is engaging in a bit of revisionist history. The biggest contributing factor to the wildfires in California is due to timber accumulation in old growth forests, which then combust in massive fires. A Forbes article in 2020 written by the author of “Apocalypse Never” Michael Shellenberger persuasively argues for people to ‘stop blaming climate change for California’s fires’.”

“Nor is it the case that California’s fires have ‘grown more apocalyptic every year,’ as The New York Times reported. In fact, 2019 saw a remarkably small amount of acreage burn, just 280,000 acres compared to 1.3 million and 1.6 million in 2017 and 2018, respectively,” he wrote.

“What about this year’s fires?”he continues. “I see [the current California fires] as a normal event, just not one that happens every year,” Jon Keeley, a leading forest scientist, told me.

“On July 30, 2008, we had massive fires throughout northern California due to a series of lightning fires in the middle of the summer,” he went on. “It’s not an annual event, but it’s not an unusual event.” 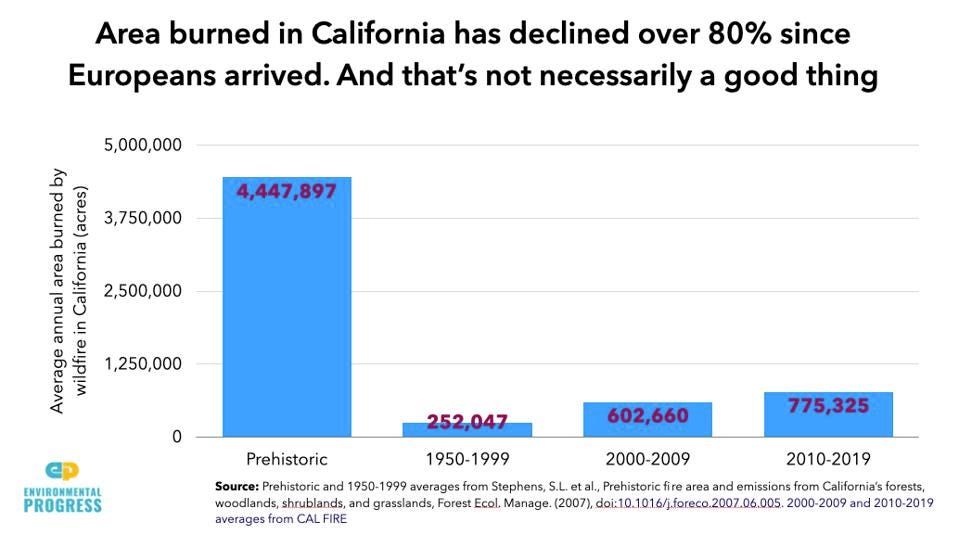 And in 2017, an article in Science said that satellite data showed, “unexpectedly, global burned area declined by ∼25% over the past 18 years, despite the influence of climate.”

But the facts don’t phase a politician like Kamala Harris, who has a long track record of holding California aloft as a clear warning about apcalyptic climate change.

“And that’s not all,” she added. “Our nation also faces water and security challenges beyond those driven by climate change. For decades, of course, our country has chronically underinvested in water infrastructure, depriving many communities of reliable access to safe-drinking water. Take the issue which many of us worked on together of lead pipes. Lead is a poison. For adults drinking water contaminated with lead can lead to an increase in blood pressure and a decrease in kidney function. For children, it can stunt growth, slowdown learning and cause irreparable damage to the brain.”

Water mismanagement in California is infamous. It got so bad at one point that even the city of San Francisco sued the state’s Water Board.

Maybe the American people at this point would rather take their chances with Nature than with any more of government’s “solutions.”