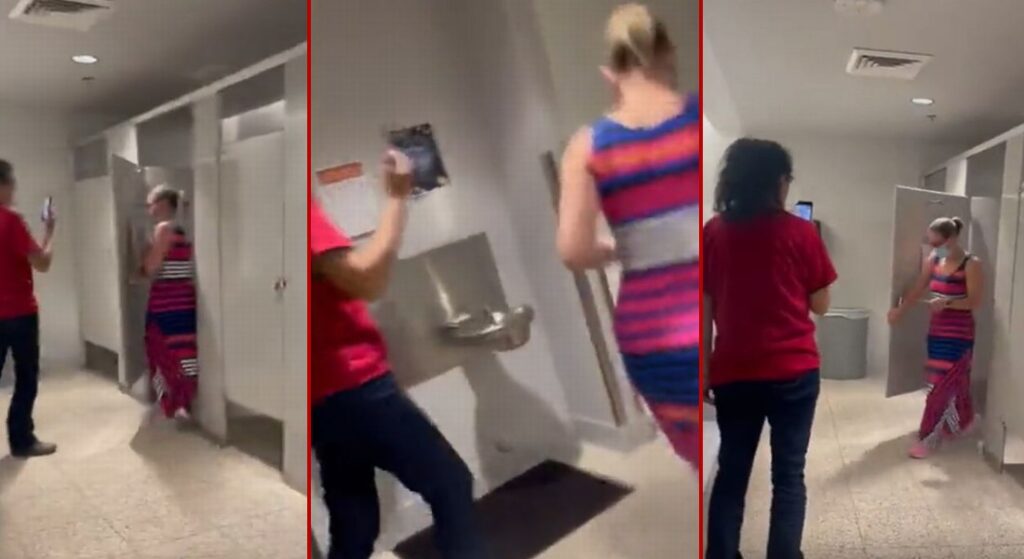 Arizona’s Senator Kyrsten Sinema got a dose of the radical left’s ‘bathroom politics’ at Arizona State University, as she attempted to use the restroom in between her teaching duties at the college.

🔴BREAKING: Blanca, an AZ immigrant youth confronts @SenatorSinema inside her classroom, where she teaches @ ASU. "in 2010 both my grandparents got deported bc of SB1070…my grandfather passed away 2 wks ago & I wasn't able to go to Mexico bc there is no pathway to citizenship." pic.twitter.com/JDZYY2fOD2

“Blanca, an AZ immigrant youth confronts Senator Sinema inside her classroom, where she teaches [at] ASU,” Lucha Arizona said about the video. “[I]n 2010 both my grandparents got deported bc of SB1070… my grandfather passed away 2 wks ago & I wasn’t able to go to Mexico bc there is no pathway to citizenship.”

One can only imagine if these were pro-life or 2nd amendment activists pulling such a tasteless stunt with a Democratic senator. Instead of being blasted for their lack of discretion, the mainstream media reported it in matter-of-fact fashion.

“Protesters followed Sen. Sinema into the bathroom at Arizona State University to confront her on Build Back Better and immigration,” Bloomberg reporter Jennifer Epstein noted.

Here are a few other angles of their bullying of Sinema:

Part 2/2
You can hear them snickering at the end. They are so proud of themselves pic.twitter.com/lZjMqFeAjJ

BREAKING: A crowd of insurrectionists just chased Senator Sinema into a bathroom at ASU screaming at her while she hid in a stall. No @CapitolPolice in sight for the female Senator.

“BREAKING: A crowd of insurrectionists just chased Senator Sinema into a bathroom at ASU screaming at her while she hid in a stall. No @CapitolPolice in sight for the female Senator,”  Posobiec remarked.

The Democrats attempted to push a ‘pathway to citizenship’ through budgetary reconciliation, a ploy that the Senate parliamentarian nixed as illegal.

Progressives have grown increasingly furious with Senator Sinema for not kowtowing to their radical agenda. HBO’s Bill Maher defended both senators Sinema and Joe Manchin, who are standing athwart of the left’s brazenly socialist agenda.

“Here’s my question: Does spending more money make you a better person?” Maher asked on his show “Real Time.”

“And maybe these two, Sinema and Manchin, do they might have their thumb more on the pulse on the average Democrat in the country?” he asked.

It’s pretty sad when it takes Bill Maher to tell liberals the obvious. But that’s where we are in America: Where any moderate Democrat who tells a socialist ‘no’ can be expected to get stalked, bullied, videorecorded, intimidated and harassed. But at least Kyrsten Sinema is standing up to the radical mob. Take a bow, Sinema.

If Sinema can keep throwing thumbs south we might survive until 2022 😂 pic.twitter.com/4SSdjFSBec