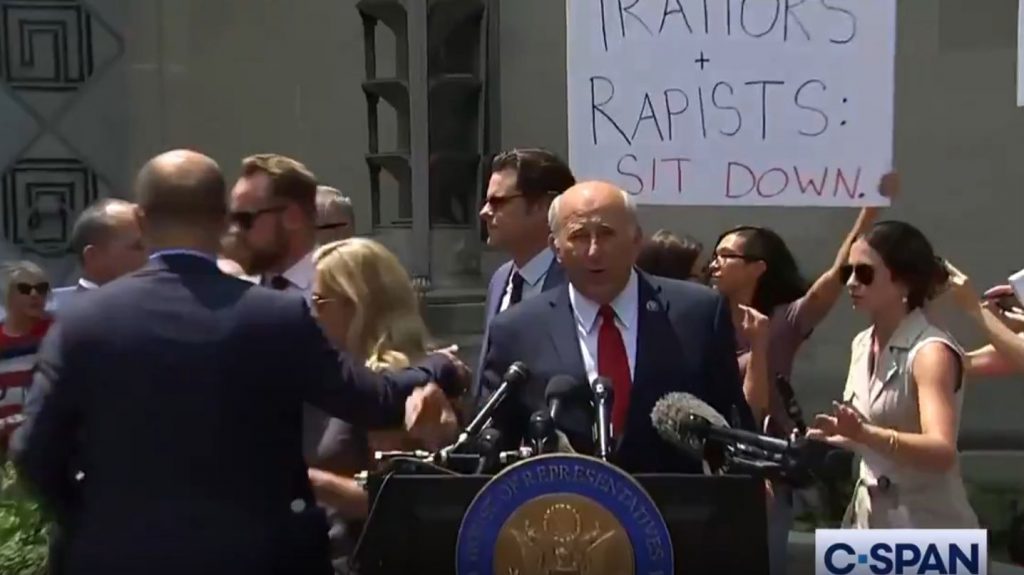 In Washington D.C. on Tuesday, Reps. Marjorie Taylor Greene, Matt Gaetz, Louie Gohmert and Paul Gosar held a news conference outside the Justice Department. The Republican House members were protesting the treatment of political prisoners being held indefinitely in connection with the Jan. 6 attack on the Capitol.

“To the guy that’s blowing the whistle: we are not deterred,” Greene said.

“And so for anyone that’s here, being an activist and yelling today, here’s the statement that I need everyone to understand: we will not back down, we will not stop asking questions, we are looking for the truth,” she continued. “And we believe the truth can be found by reaching out and answering and asking the right questions to the right people.”

Shortly thereafter, an unidentified man who appeared to be holding back the protesters put an end to the event.

“The left is interrupting the press conference, we need to end it,” the man declared.

When the Republican lawmakers ended the event, the counter-protesters even followed them away from the Justice Department, badgering and harassing them.

The Republicans had merely gathered to draw attention to apparent injustice being carried out against Jan. 6 political prisoners.

Republican Paul Gosar explained the reason for the event were “disturbing reports” that some prisoners were being abused and held in solitary confinement for as much as 23 hours a day.

“I, too, am happy to join my Republican colleagues and demand the answers to the very troubling reports that the Biden administration and Justice Department are mistreating nonviolent prisoners in connection with Jan. 6,” he said.

“These are not unruly or dangerous, violent criminals, these are political prisoners who are now being persecuted during the pain of unjust suffering,” he added.

Even Democratic Senators and the ACLU have agreed with criticism of the inhumane conditions being reported in connection to the detainmente of the Jan. 6 prisoners. None of have been charged with “insurrection” or carrying a firearm inside the Capitol building. Most have charges of ‘criminal trespassing’ and ‘entering a federal building without authorization.’

“Solitary confinement is a form of punishment that is cruel and psychologically damaging,” Ms Warren told Politico in an interview. “And we’re talking about people who haven’t been convicted of anything yet.”

The ACLU has also issued an extraordinary statement that points to the organization’s concerns about the political prisoners.

“Prolonged solitary confinement is torture and certainly should not be used as a punitive tool to intimidate or extract cooperation. We’re pleased to see that message is getting through to Senators,” Tammie Gregg, deputy director of the ACLU National Prison Project, told the Washington Examiner in a statement.

When radical protesters are to the left of Elizabeth Warren and the ACLU, that’s a pretty good indication that they are way out-of-line.