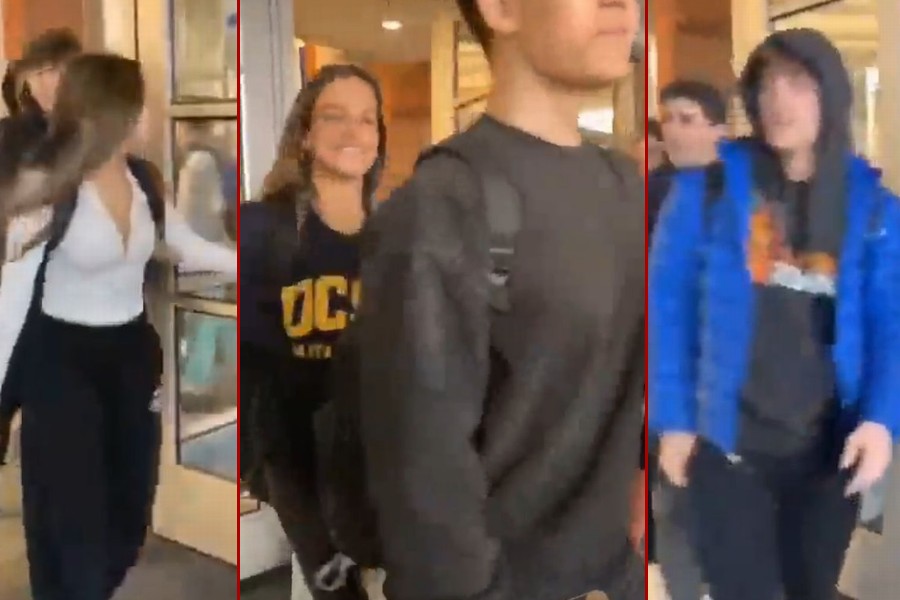 Blue state governors are in full retreat across America, save for last bastions of Covid insanity like New York.

As reported earlier: New Jersey is done. Connecticut is done. Delaware is done. Oregon is done. But many school boards are defying governor’s orders and court rulings that dictate that parents and students have the right to determine whether or not the schoolkids wear masks.

In Illinois, a judge has issued a restraining order on the governor’s school mask mandate, but Chicago area school boards are resisting the court ruling and clinging to the edicts.

“Frustrated Chicago-area students walked out of school Monday after being told they were required to wear masks to attend class, despite an Illinois judge having issued a temporary restraining order against the governor’s statewide school mask mandate,” the Daily Mail reported.

“The maskless Vernon Hills High School students were denied entry into classrooms and escorted into the gymnasium, where they were instructed to either mask up, leave school and have a parent report the absence, or work on classwork isolated in the gym,” the report added.

“Video of the protest shows a throng of students exiting the gym before walking out the school’s front doors where they are met with applause and positive remarks including: ‘Good job, way to stand up for yourselves.'”

In Vernon Hills near Chicago, students filed out of the school after being given an ultimatum by the principal: Mask up or go home.

“Students at Vernon Hills near Chicago leave their school,” STV tweeted. “The director announced to them that from now on they either come to school wearing masks or they leave. The students chose the latter. Previously, the same situation occurred in Virginia and the state of Washington.”

In Virginia, school boards have pushed back against new Governor Youngkin’s executive order that make masks optional in the state. A legal challenge from the parents and school boards that had issued a stay on the order was recently struck down.

“The Supreme Court of Virginia has tossed out a case challenging Republican Gov. Glenn Youngkin’s executive order allowing parents to opt their children out of school mask mandates,” the Blaze reported.

“Today, the Supreme Court of Virginia rejected a challenge out of the City of Chesapeake to Governor Youngkin’s Executive Order Number 2. The Governor and I are pleased with today’s ruling. At the beginning of this pandemic, Governor Northam used his broad emergency powers to close places of worship, private businesses, and schools and impose a statewide mask mandate,” Miyares said.

Blue state governors and teacher’s unions can cling to the inordinate power that Covid seems to have given them. But that power is proving to be fleeting as scientific reality has set in. The truth has finally caught up to the lies. The charade is over.