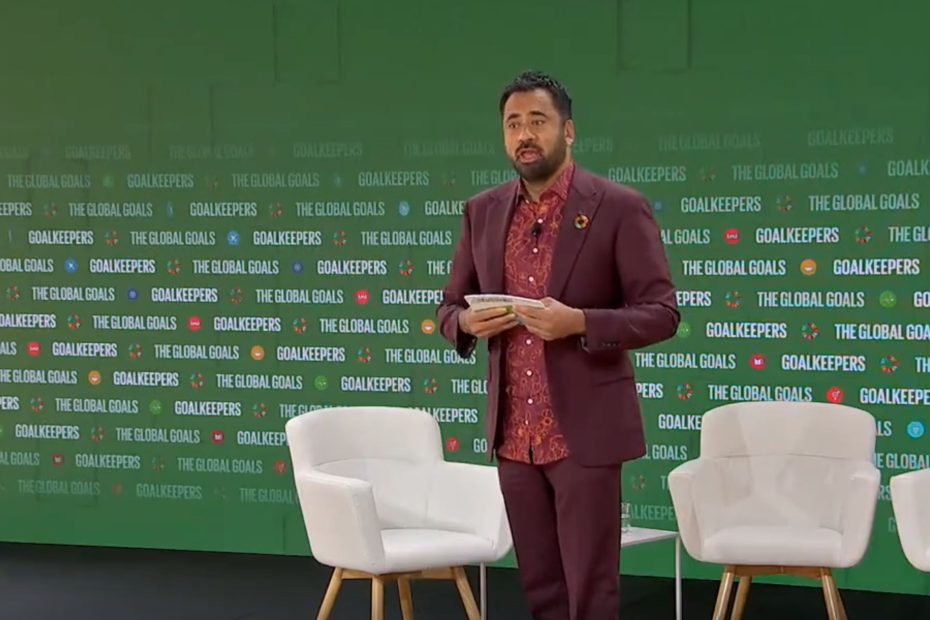 Hollywood actor Kal Penn, best known for portraying a druggie burnout in the Harold & Kumar film series, has been heavily immersed in political activism since the Obama administration.

So, when Kal Penn presented for the Bill & Melinda Gates Foundation at its 2022 Goalkeepers conference, surrounded by he must have thought that his ‘jokes’ dismissing Covid ‘conspiracy theories’ would surely score laughs.

Instead, his presentation fell flat. It was so remarkably awkward that one could almost sense his comments were having the opposite effect. Watch:

“The vaccines that saved millions of lives and have allowed us to return to normal,” Penn said. “Even those things are viewed with skepticism.”

“Take, for example, the words of a 5G conspiracy theorist in June of 2020, who said, here’s the quote, ‘5G Corona is the hashtag truth. There is no damn virus. We all got sick around the same time. And that’s when they rolled out 5g’… okay. Or the words, a very enthusiastic Twitter user posted in December of 2020, when scientists released the first vaccines for COVID 19. Here’s the quote from that. ‘Look, Jacob, what you don’t understand is that Pence and Biden didn’t actually get the vaccine. Instead, they were injected. You all know where this is going with Bill Gates’ microchip designed to force you to only buy Microsoft products. Do your research, sheeple.”

“Now look, jokes aside, to be clear, many conspiracies are based on very real fears, right?” he went on. “For a lot of communities, especially communities of color, governments and the private sector institutions and individuals have historically experimented on us and degraded and disrupted our parents or grandparents or great-grandparents’ generations. The effects and consequences of this are still things that we grapple with today.”

“But let’s face it,” he continued. “It doesn’t make a big difference in Bill Gates’ life if people think he’s microchipping you, when he knows he’s not. He’s too busy jumping on the trampoline in his living room.”

“Anyway,” he added awkwardly. “Instead, conspiracy theories hurts everybody else. This entire event is about reaching the sustainable development goals, ending poverty, ending hunger, improving health. But we’re not gonna improve health, if people believe their medicine has a GPS tracker in it. And we’re not gonna help farmers in Africa grow more food. If everyone thinks that the corn, that Bill wheeled in here is a secret Illuminati plot to take over the ethanol market. The point is it doesn’t matter how good your idea is if no one trusts you. So the question remains, what can we actually do about it?”

It’s interesting that Kal Penn should bring up a collapse of trust in the medical establishment after the numerous false promises that the experts made to sell the mRNA ‘vaccines’ at any cost.

Even today, Pfizer CEO Albert Bourla announced that he has Covid for the second time in six weeks after initially promising 100% effectiveness in stopping the spread of the virus in April 2021.

But Experts are completely baffled.pic.twitter.com/3fuYxLVUm6

“But altogether now, correlation is not causation,” Steyn remarked.

Indeed, it could all be a coincidence. Just like it’s a coincidence that vaccines don’t stop the spread. And that masks don’t stop the spread. And that lockdowns saved almost no lives, but did extraordinary economic and social damage. It could just be that the Experts were stupid when they ignored decades of scientific research that strongly suggested that those measures wouldn’t work.

That is inevitably going to cause a crisis in the public trust.

It’s also enough to cause thinking people to ask questions. And no amount of repeatedly denouncing people who ask questions as ‘conspiracy theorists’ is going to stop it. It’s too late for that now. The Experts should have thought about that before they decided that they could arrogantly lie to people’s faces over and over again and get away with it.