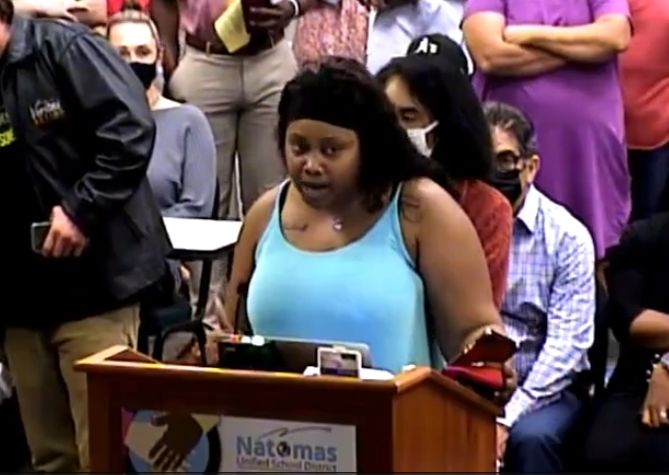 Parents fed up with a “Woke” school board in Sacramento, California lined up in mass to blast the educators for a communist teacher who was outed by Project Veritas in a video that has since gone viral.

One woman grew particularly heated over the ‘fascist’ indoctrination of her child. Watch:

The woman’s tirade referred to Gabriel Gipe, a public school teacher at Inderkum High School who aligns himself with violent communist group Antifa.

He was exposed by Project Veritas for his communist brainwashing tactics, as he explains on camera below.

“I have 180 days to turn them [students] into revolutionaries…Scare the f*ck out of them,” Gipe said.

“I post a calendar every week…I’ve had students show up for protests, community events, tabling, food distribution, all sorts of things…When they go, they take pictures, write up a reflection — that’s their extra credit,” he said.

That’s really the entire radical agenda in a nutshell: ‘Scare the f***’ out of the American people until they comply. You see it with the Covid mandates, which have little children sitting for eight hours a day with masks on, despite there being a shred of evidence they do anything, while there is a moutain of evidence they psychologically harm kids. You see it with climate change, where we all pretend that climate never changes and that natural disasters and even the fluctuation of the weather are something new. Well, parents are fed up with the mind games, particularly when their kids are involved.

The Natomas School Board meeting on Wednesday was an event unlike they had seen before.

About 70 people currently staged in front of the Natomas Unified School District offices to protest the methods of an AP History teacher at Inderkum High School. The district earlier today announced plans to terminate the teacher. pic.twitter.com/62PzfNBx9d

The parents lined up one after another and put the school board on blast. The full meeting is posted below.

The Natomas School Board came under so much pressure it decided that it would be best to simply suspend Gabriel Gipe with pay while seeking ways to terminate the ‘teacher’ for cause.

“Pro-Antifa California Teacher Gabriel Gipe to be FIRED by @NatomasUSD as a Result of Project Veritas Video,” Project Veritas’ James O’Keefe said in an update. “Natomas Unified Will be Taking the Legally Required Next Steps to Place the Teacher on Unpaid Leave and Fire the Teacher.”

It goes to show how ‘parent power’ could be used to turn around this nation.

Jen Psaki Responds to ‘Bombshell’ Biden Phone Call Transcript, But Unearthed Receipts Show She Once Had a Different Tone