“Welcome to the Stupidest Week in the Senate”: GOP Senator Unloads on Trump Impeachment Trial

One GOP Senator is not holding back about what he really thinks about the Democrats’ dead-on-arrival impeachment vendetta.

North Dakota Senator Kevin Cramer lambasted the Democrats and five Republican senators who decided to proceed with the show trial. 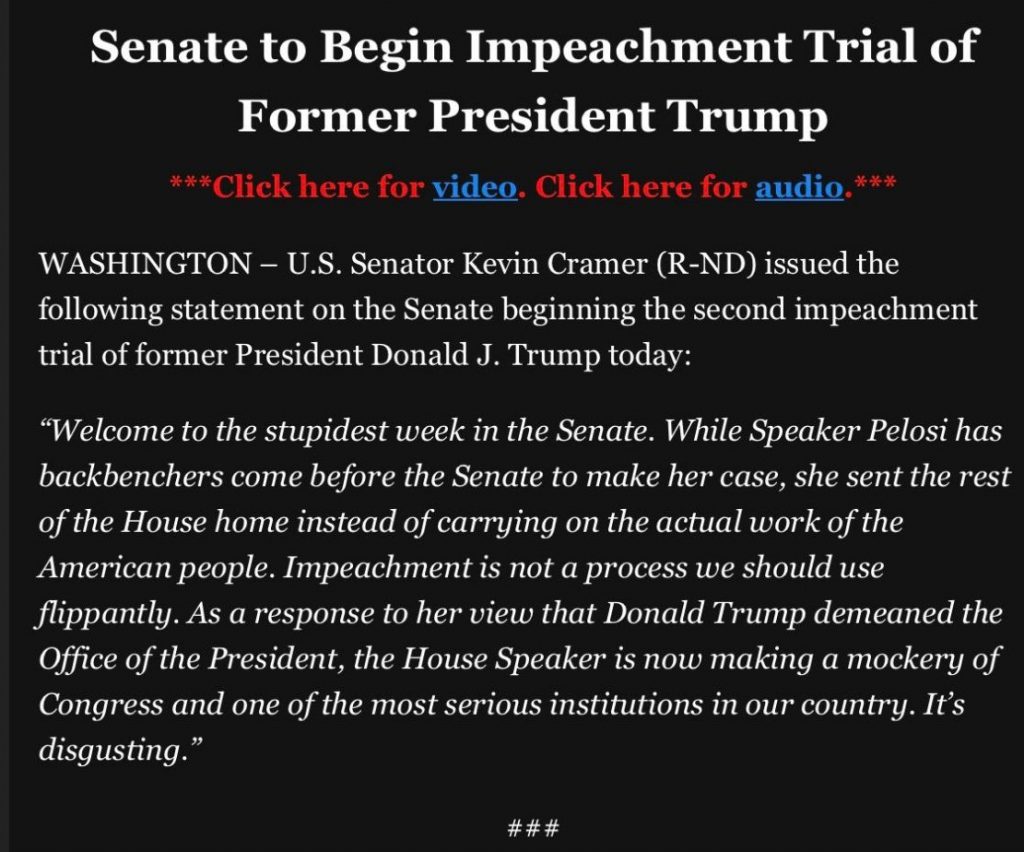 “Welcome to the stupidest week in the Senate. While Speaker Pelosi has backbenchers come before the Senate to make her case, she has sent the rest of the House home instead of carrying on the actual work of the American people,” Cramer’s message said.

“Impeachment is not a process we should use flippantly. As a response to her view that Donald Trump demeaned the Office of the President, the House Speaker is now making a mockery of the Congress and one of the most serious institutions in our country. It’s disgusting.”

Senator Cramer is a consistent Trump supporter who backed him on the campaign trail.

Cramer also blasted the “very partisan” and “quite frankly quite ridiculous” in an impassioned speech that lays out why he opposed the House Democrats’ first impeachment effort.

“A conclusion in search of a justification,” he called it. It seems familiar.

Only five Republicans supported proceeding with the Senate impeachment trial and only five decided to proceed with it, namely: Mitt Romney, Lisa Murkowski, Pat Toomey, Susan Collins and Ben Sasse.

As reported earlier, Rasmussen states most Americans believe the Democrats’ crusade to get revenge on Trump is dead-on-arrival:

The news gets worse for the Democrats and anti-Trump Republicans: ‘Nobody cares.’

It appears that Cramer’s blast represents the views of a lot of Americans who believe the Democrats’ show trial is nothing more than a sad attempt to get revenge on a political enemy.

Fortunately for America and for Donald Trump, it appears their politically dishonest stunt is likely to fail.