White House Deputy Press Secretary Karine Jean-Pierre was asked a simple question on Friday by Newsmax’s Emerald Robinson. Her answer is a cause for concern about the White House’s disposition towards informing the public about COVID-19.

Jean-Pierre was asked about how the U.S. government knows the recent reported surge in COVID cases is being fueled by the Delta variant. Watch:

“How do you test?” Robinson asked. “When it’s the dominant strain in an area, when people just test whether they’re COVID positive?”

No, she didn’t understand the question. ‘Trust the experts,’ is not a valid response. Robinson is asking how scientists know specifically that a local COVID case surge is being fueled by the Delta variant.

There is a simple answer to this question and it’s not “we listen to the scientists.” It’s called genome sequencing.

According to the Centers for Disease Control, the “CDC’s national genomic surveillance program identifies new and emerging SARS-CoV-2 variants to determine implications for COVID-19 diagnostics, treatments, and vaccines authorized for use in the United States,” the agency’s website states. “Monitoring the spread of emerging variants in the United States relies on widespread, rapid sequencing.” 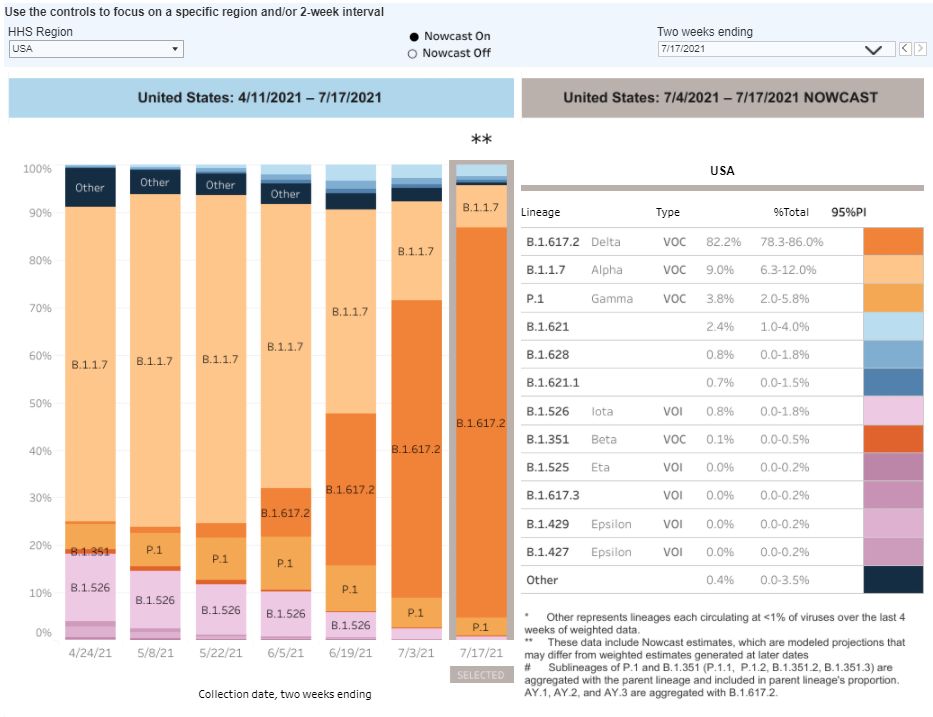 The variant proportions over time can be checked at the CDC’s website. One can also review the regional proportions of the variants. 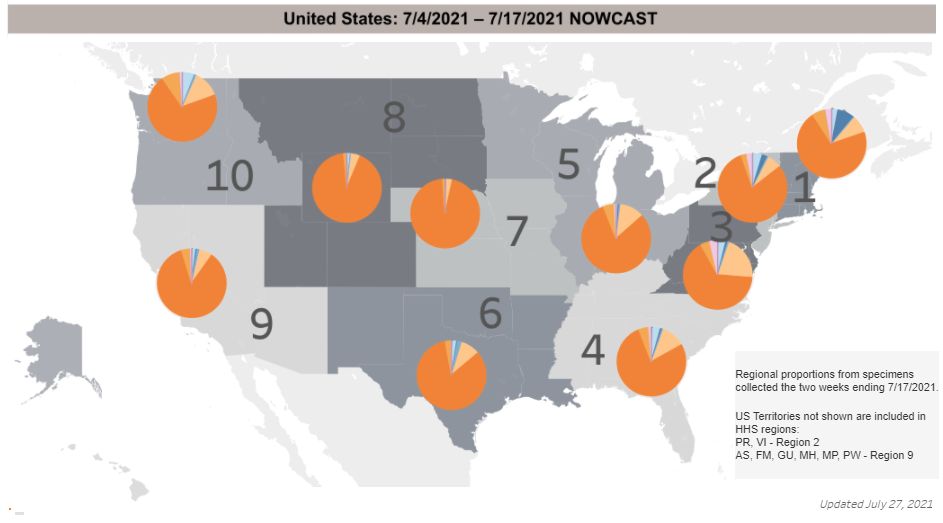 The proportions of variants, based on GISAID data submitted to the CDC, was reported by the Wall Street Journal on Friday. 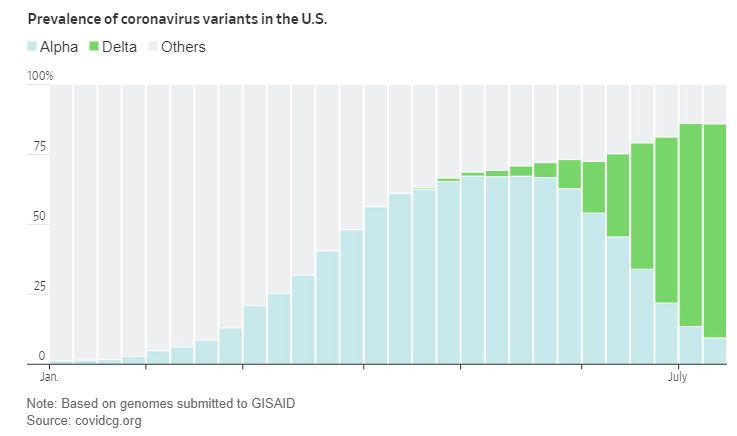 There is also statistical COVID data available by state or jurisdiction. The color coded map of COVID transmission levels (low, moderate, substantial, high) at the county level can also be found on the CDC website. 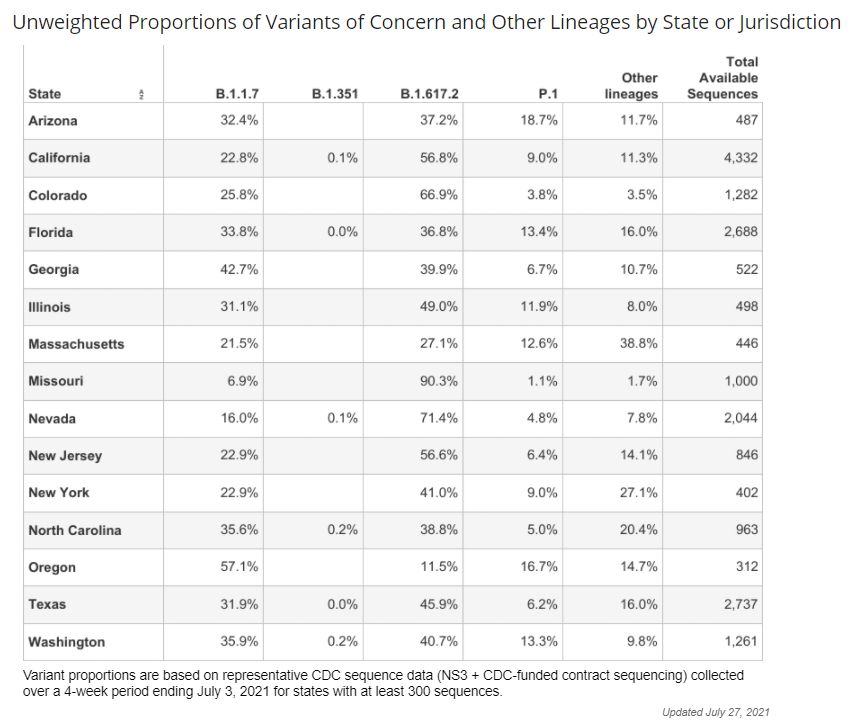 While the Delta variant surges throughout the United States, the COVID variant predominately poses a threat to the unvaccinated.

“The Delta variant has been detected in more than 60 countries, and this week accounts for 80% of all COVID-19 infections in the United States,” Cox media reported on Tuesday.

“Most of the cases we see and essentially all of the hospitalized cases we have seen have been in unvaccinated people,” said Robert W. Finberg, MD, distinguished professor of medicine.

“Nationwide, the Delta variant is responsible for 83 percent of new COVID-19 cases and 97 percent of people hospitalized with COVID-19 are unvaccinated,” UMass Medical School reported, citing the CDC. 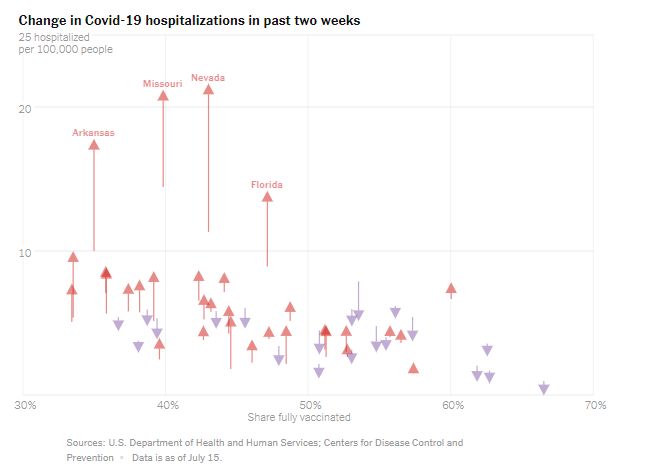 “Covid-19 hospitalization rates, an indicator of serious illness, have increased more drastically over the past two weeks in many states where vaccination levels are comparatively low and where the Delta variant is driving a surge in cases, including Arkansas, Mississippi and Missouri,” the Times reported in mid-July.

The CDC reports that the United States is seeing a “case” surge, fueled largely by the Delta variant. 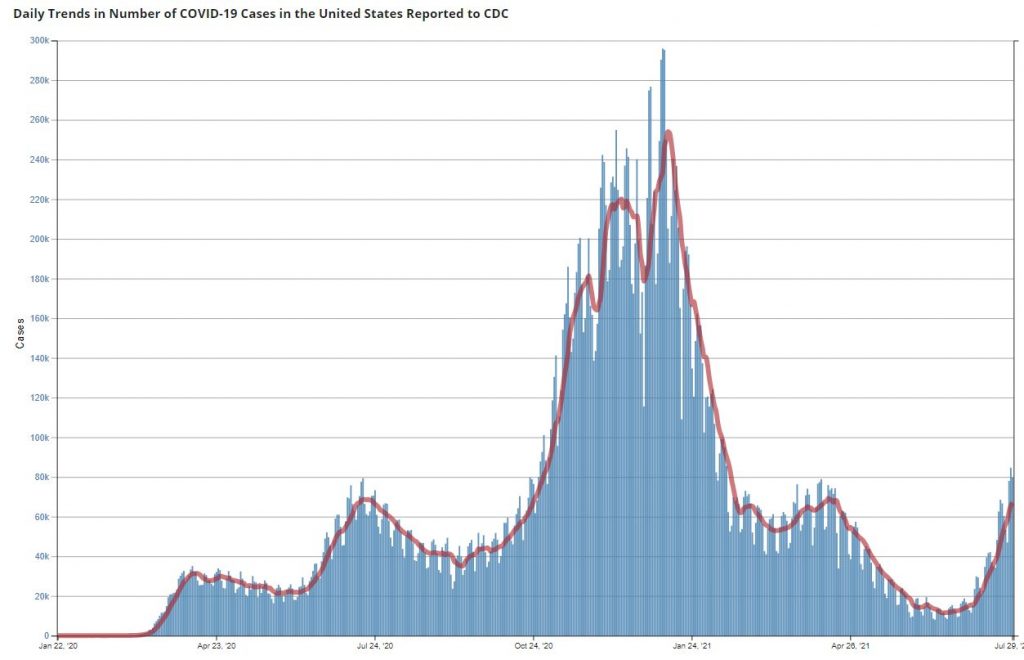 However, this case surge is not being accompanied by an increasing mortality rate, meaning Delta is less deadly for a number of factors, particularly to the vaccinated. 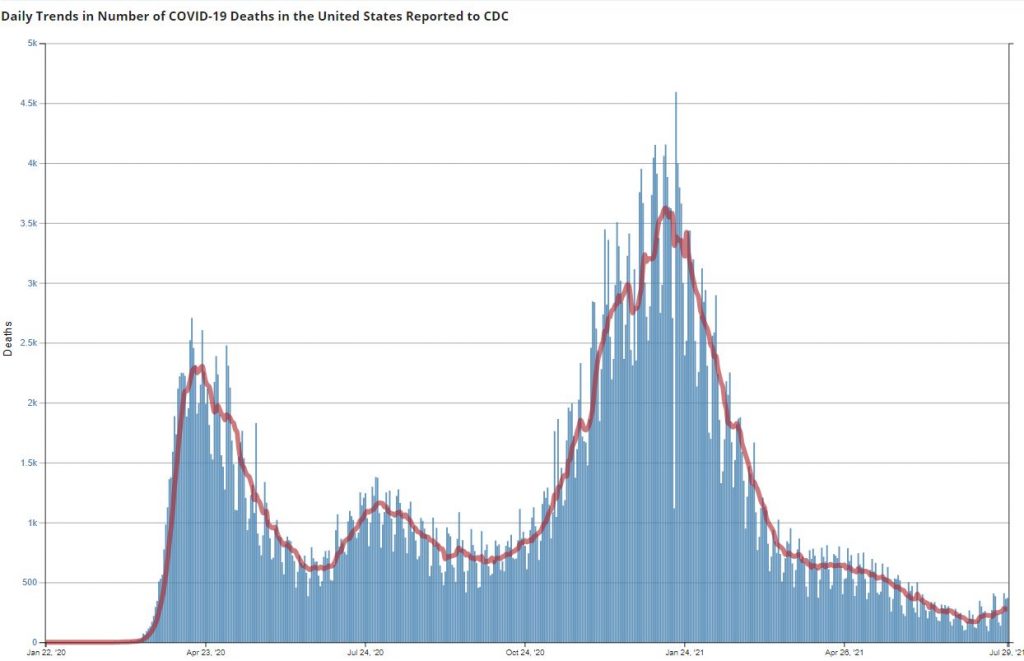 Former FDA commissioner Dr. Scott Gottlieb, who serves on the board of vaccine maker Pfizer, urged more people to get vaccinated, including younger people who may have been hesitant due to not being “at-risk.”

However, Dr. Gottlieb believes that we are even further into the Delta wave than the testing data report, meaning that the country is closer to turning the corner.

Essentially, between vaccinated immunity and herd immunity, this means that the Delta variant is set to fizzle out within a matter of weeks.

“I think the more observable trend is what’s going on in the United Kingdom, where cases are clearly coming down at this point. There’s a very clear trend down. It seems like they’ve peaked,” Gottlieb said in a recent interview on CNBC.

“We’ll be turning a corner right at the point that schools start to reopen, and my concern is that schools reopening could cause sort of a second bump in cases, or could look like a pattern where you start to see a decline and then it levels out because the reopening of the schools becomes a source of local transmission, and we don’t quite get out of it as quickly as we would’ve,” he added. “That remains to be seen.”