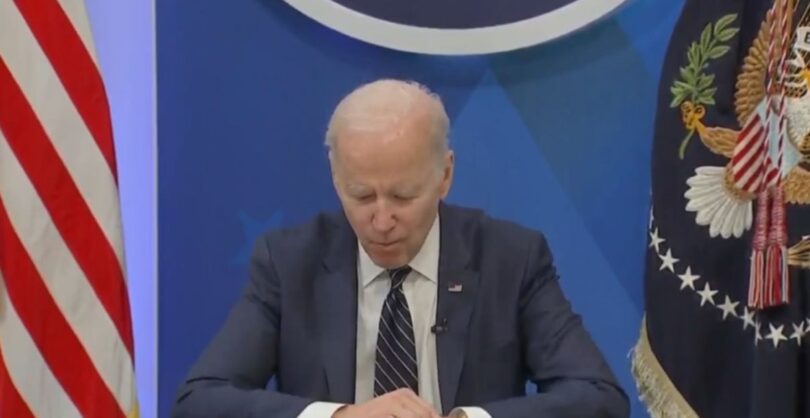 The White House feed was cut after President Biden ignored reporters confronting him with questions about his phone call with Chinese president Xi Jinping on Friday. Watch:

“What was your message to President Xi, Mr. President?”

Biden ignored the question. The White House feed then gets cut.

The White House nonetheless released a readout of Biden’s call with Xi Jinping.

President Joseph R. Biden, Jr. spoke today with President Xi Jinping of the People’s Republic of China (PRC). The conversation focused on Russia’s unprovoked invasion of Ukraine. President Biden outlined the views of the United States and our Allies and partners on this crisis. President Biden detailed our efforts to prevent and then respond to the invasion, including by imposing costs on Russia.

He described the implications and consequences if China provides material support to Russia as it conducts brutal attacks against Ukrainian cities and civilians. The President underscored his support for a diplomatic resolution to the crisis. The two leaders also agreed on the importance of maintaining open lines of communication, to manage the competition between our two countries.

The President reiterated that U.S. policy on Taiwan has not changed, and emphasized that the United States continues to oppose any unilateral changes to the status quo. The two leaders tasked their teams to follow up on today’s conversation in the critical period ahead.

The White House has not made it clear how the United States intends to punish China for aiding Russia in its invasion of Ukraine, nor did it provide details on reprisals should it move on Taiwan.

The Chinese government has been purchasing Russian oil and gas in yuan, despite the United States embargo. Even more concerning for the dollar’s status as reserve currency of choice, since Saudia Arabia and India are both considering trading for oil in yuan.

The White House read-out of Biden’s call with Xi Jinping reads every bit like one from a president whose son made millions from CCP agent-linked business deals.

The United States’ weakness against China is so obvious that even Biden’s fleeting moments of ‘tough talk’ can’t even hide it anymore. He just prefers to ignore questions about it until the White House pulls the plug.