Will Smith’s Oscar Speech After Slapping Chris Rock Had Everything — God, the Devil, Crying — Except an Apology to Chris Rock 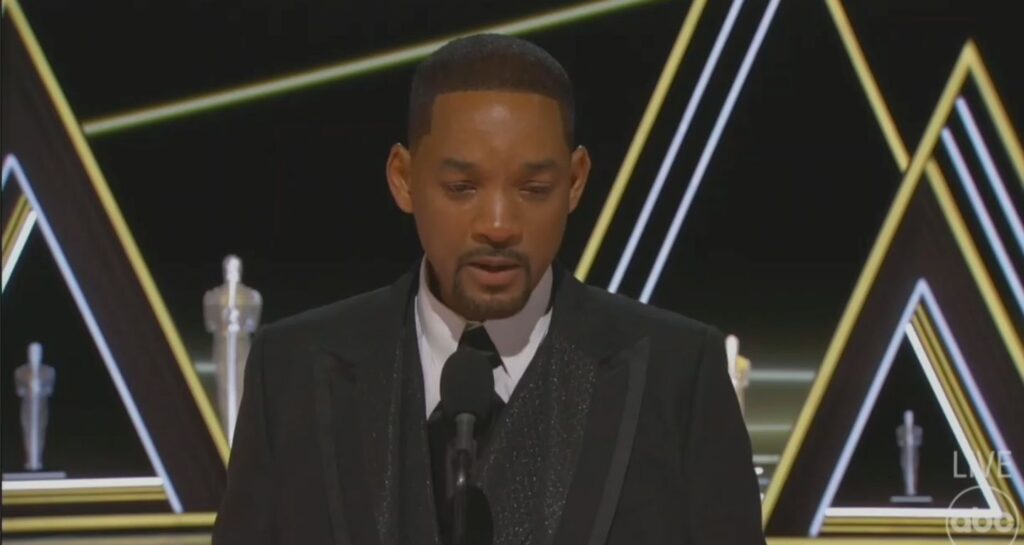 Will Smith had already had a momentous night. That was before he won the Best Actor award for his role in King Richard.

Smith had charged the stage after what was a commonplace Oscar joke made by legendary comedian Chris Rock about his wife Jada Pinkett Smith.

The veteran actor was a sea of emotions at the 94th Academy Awards: He went from laughing at Rock’s joke to open-hand slapping Chris Rock across the mouth.

As Will Smith gave his acceptance speech, tears flowing, he talked about God, the devil, apologizing (to everyone but Chris Rock), and how he hoped the Academy would have him back. Watch:

“Oh man, uh, Richard Williams, um, was a fierce defender of his family,” Smith began. “In this time in my life, in this moment, I am overwhelmed by what God is calling on me to do and be in this world.”

“Thank you, D,” Smith said. “Denzel said to me a few minutes ago, he said at your highest moment, be careful. That’s when the devil comes for you.”

“Tim and, and Trevor and Zach and Saniyya and Demi and Aunjanue new and the entire cast and crew of king Richard and Venus and Serena, the, the entire Williams family, Art imitates life. I look like the crazy father, just like they said, I learned like crazy father, just like they said about Richard William. But love will make you do crazy things.”

“To my mother, a lot of this moment is really complicated for me, but to, to my mother, she didn’t want to come out,” Smith said. “She’s had her knitting friends. She has a knitting crew that she’s in Philly watching watch it with being able to love and care for my mother and my family, my wife. I’m taking up too much time. Thank you for this honor. Thank you for this moment. And thank you on behalf of Richard and, and  the entire Williams family. Thank you. Uh, hoping the Academy invites me back. Thank you.”

Chris Rock declined to press charges against Will Smith with the LAPD. Smith has yet to make a public apology to Rock or to thank him for showing the love and forgiveness he talked about in his acceptance speech.

Full, Uncensored Video of Will Smith Assaulting Chris Rock at the Oscars is Worse Than the Live Version