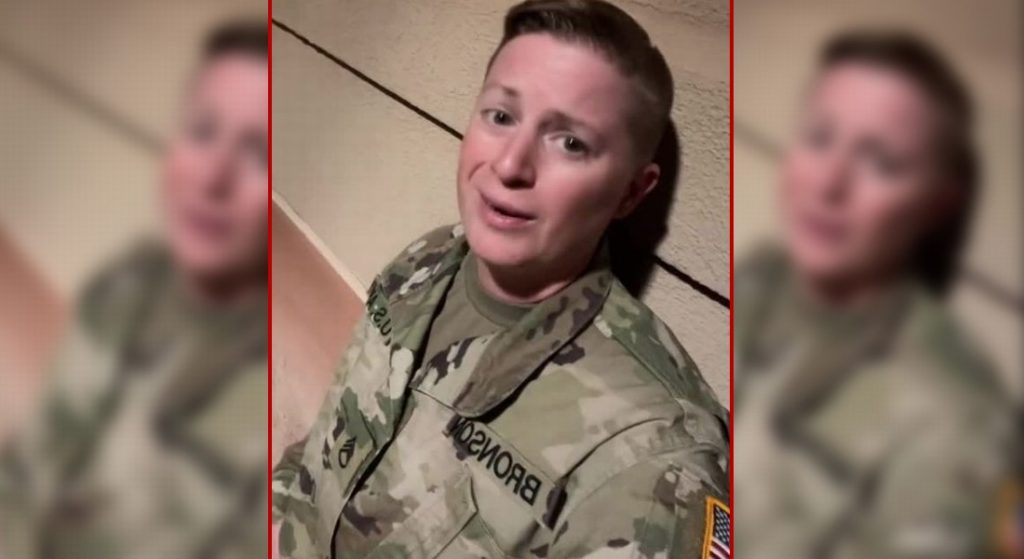 A “woke” Staff Sergeant in the U.S. Army has gotten the attention of American civilians, whom she threatened if they disobey her hypothetical orders in the event of martial law. They become the “enemy,” Staff Sergeant Bronson warned, while wearing her BDUs on a Tik Tok video.

Sergeant Bronson was arguing with a civilian who was expressing her own extreme views on social media, such as asking where the military was at, and suggesting that gun owners will come out and start a ‘bloodbath.’

Her response, directed at the social media audience, was interpreted by many people to be a threatening one.

“Understand that if active duty military actually get deployed within the United States, that weapon is not just pointed at other people or other countries. It’s pointed at you,” Bronson said. “If you do not get in your house when I tell you to, you become the enemy. Martial law.”

Bronson’s viral clip that has gotten the rounds on social media and was recently posted by Travis Wines, a self-described America First candidate for Congress in Ohio.

“Woke soldier says she’ll shoot Americans who disobey her if martial law is declared,” Wines wrote on Twitter. “She must not realize how many of us veterans have the same training and won’t be on her side.”

The video clip set off an avalanche of reposts and fiery responses from conservatives on Twitter, including several military veterans.

Kick her out of the armed forces immediately https://t.co/JUHDi8cyi4

“Kick her out of the armed forces immediately,” Jack Posobiec said.

This hypothetical threat of force against US citizens is chilling. https://t.co/N5XuNWTPq9

“This hypothetical threat of force against US citizens is chilling,” Chris Loesch said.

The full context of the video should be watched, because the short clip does not show the civilian she is arguing with, nor the broader context of her debate.

Sergeant Bronson has posted a considerable volume of “Woke” videos, several of them arguing with fellow soldiers and with civilians about politics and the military. Bronson’s Tik Tok account is called @nuggets_n_chicken.

Bronson herself fired back a response to critics of her conduct on Twitter.

Wow so I was unaware I’m trending on Twitter 😂 thank you for all the love and support. Remember the video posted is informative of the insurrection act and not my opinion. My views are my own and I do not speak for the military or any other entity.

“Wow so I was unaware I’m trending on Twitter 😂 thank you for all the love and support,” Bronson responded. “Remember the video posted is informative of the insurrection act and not my opinion. My views are my own and I do not speak for the military or any other entity.”

However, it is undeniably her opinion, which was issued in military uniform, and is therefore, a violation of the Uniform Code of Military Justice. Sergeant Bronson is speaking about her view that Americans civilians, whom she calls “you” to her social media audience, become the “enemy” in the hypothetical case of martial law.

Sergeant Bronson argues further with the audience, which reminds her that warnings to the American public about leaving their homes without her permission, in a hypothetical martial law situation, run contrary to the Posse Commitatus Act. Bronson responds by pointing to the Insurrection Act of 1807.

The issue with her argument is that this is not being “informative.” It not her role to misrepresent military authority to argue with or intimidate civilians, or other military members, with her conjecture about orders that have not been issued, while in military uniform. Military guidance on this matter is clear.

“Service members must also be careful not to comment, post, or link to material that violates the Uniform Code of Military Justice (UCMJ) or Service regulation,” DOD guidance states. “Examples include showing contempt for public officials, releasing sensitive information, or posting unprofessional material that is prejudicial to good order and discipline or Service discrediting under the UCMJ.”

The Frequently Asked Questions for Active Duty military troops is equally clear about the restrictions on posting on social media while in military uniform.

“Many members not on active duty may actively participate in partisan politics,” the DOD’s FAQ states. “However, members cannot wear the uniform and cannot otherwise act in a manner that could reasonably give rise to the inference or appearance of official sponsorship, approval, or endorsement.”

Becker News has identified Staff Sergeant Bronson by full name, as well as her command post and chain-of-command. A request for official response from her commanders has been issued. Early reaction from the chain-of-command is that presently the difficult situation in Afghanistan is preventing a timely response.

Becker News will continue to follow up as warranted until the matter can be properly addressed. Official responses will be provided in post updates as they become available.