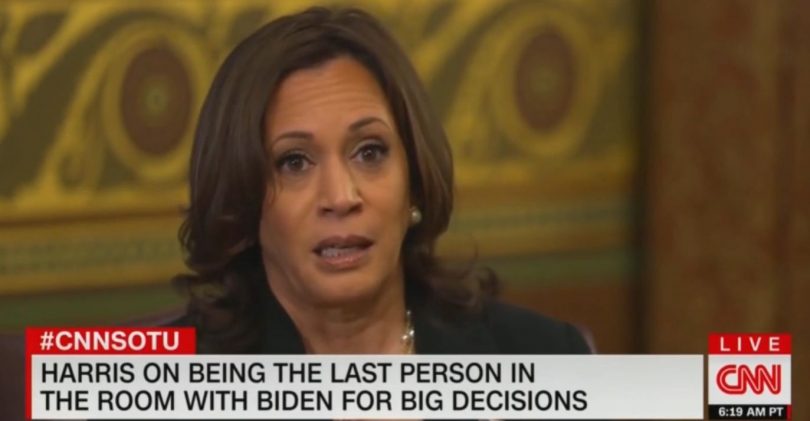 Vice President Kamala Harris reportedly did not want any part of facing the music on Sunday after the catastrophic collapse of Afghanistan. The U.S. humiliation on the world stage set off public demands to hear from the president; but in the absence of the Commander-in-Chief, any White House explanation about the disastrous finale in a two-decades-long war would have sufficed.

According to multiple reports, Harris was asked to address the American people on Sunday about the unraveling situation in the war-torn country, but refused. As the Taliban threatened the lives of thousands of Americans and allies in Kabul, pressure mounted on the White House to look the people in the eye and explain what happened. Yet, no one did.

The report is corroborated by OANN’s Jack Posobiec, who provides the account that Harris objected to addressing the American people.

“Shade War going hot – Kamala refused a request to do a presser today,” Posobiec reported. “Said she was focused on Haiti not Afghanistan. Now staffers for the rival teams have been openly fighting all day, per WH official.”

While Kamala Harris wanted no blame for the collapse of Afghanistan, she boasted in April about the White House’s decision to do a precipitous withdrawal against the advice of generals.

“President Biden always said that he wants you to be the last person in the room, particularly for big decisions, just as he was for President Obama,” CNN’s Dana Bash said. “He just made a really big decision, Afghanistan.”

“Were you the last person in the room?” she continued.

“And you feel comfortable?” Bash followed up.

“I do,” she responded. “And I’m going to add to that. This is a president who has an extraordinary amount of courage.”

This is coming from someone who didn’t have the ‘courage’ to face the American people, which could also be said for the president on Sunday.

“And I’m going to tell you something about him. He is acutely aware that it may not be politically popular or advantageous for him personally. It’s really something to see, and I wish that the American public could see sometimes what I see, because ultimately — and the decision always rests with him, but I have seen him over and over again make decisions based exactly on what he believes is right, regardless of what maybe the political people tell him is in his best selfish interest,” she said.

Both President Joe Biden and Kamala Harris made the decision to precipitously withdraw U.S. troops in Afghanistan against the advice of generals.

“President Biden used his daily national security briefing on the morning of April 6 to deliver the news that his senior military leaders suspected was coming,” the New York Times reported in April. “He wanted all American troops out of Afghanistan by Sept. 11, the 20th anniversary of the attacks on New York and the Pentagon.”

“I take what you said as a decision, sir,” General Mark Milley said, according to officials with knowledge of the meeting. “Is that correct, Mr. President?” Biden confirmed the decision.

“The current military leadership hoped it, too, could convince a new president to maintain at least a modest troop presence, trying to talk Mr. Biden into keeping a residual force and setting conditions on any withdrawal,” the Times continued. “But Mr. Biden refused to be persuaded.”

Now that even Biden-friendly media outlets from Politico to CNN concede that the Afghanistan withdrawal was ‘bungled,’ the onus of blame falls both on Joe Biden and the ‘last person in the room’ Kamala Harris.

That neither of them had the ‘courage’ on Sunday to face the American people is telling; and while it was reported that Biden would only address the people within a ‘few days,’ he will be speaking on the Afghanistan collapse on Monday afternoon. Whether or not he will only want to talk about “happy things,” and put a rosy spin on one of the worst military disasters since the Fall of Saigon, will remain to be seen.